11/03/2017
Tonight, its back at a full house Flapper in Birmingham for another electro gig from Among The Echoes, with Shelter and Sinestar making a great triple header night to raising funds for the charity PROMISE DREAMS:

Promise Dreams is a national charity that aims to make a real difference to children who are sick or terminally ill. Every child has a dream and we work tirelessly to make it come true - whether it is for the holiday of a lifetime, the chance to meet their celebrity hero or provide essential equipment and resources for the home. In fact, anything that will make life happier for the family in need.

Getting crowd warmed up for the evening (and keeping them there during the changeovers) is local DJ Paul Jones, spinning an electric electronic/goth/punk set.

Shelter
Shelter is the first act on the small Flapper stage, a duet with Mark R Bebb (vocals) and Rob Bradley (keyboards) and have released a number of singles including ‘beautiful’ recorded with Andy Bell, and in 2014 (cant believe it was that long ago!) toured the UK with Erasure. Shelter - who give us some very dancy flamboyant synth-pop, including tracks ‘Fierce’ and ‘Diablo’ They have recently released their second album ‘Ascend’. Check them out on the Ministry of Pop - the UK’s newest independent label for great pop and dance music.

Sinestar
Comprising Mark Trueman (Keys and programming), Iain Brownlie (Vox and guitar), Matt Mohangee (Drums), James Skuse (Bass), this Bristol based synth band formed in 2011 and have gained a lot of exposure and a decent following since then. Sinestar have released 2 EP’s Titled “I am the rain” in 2012 and ” Hope and Prey” in 2013. The band released their Debut album “Singularis” at the end of 2013.They also recently appeared on BBC4’s show ‘UK’s Best Part Time Band’ getting down to the final 25 acts.
Introduced on stage by Harborough FM DJ, Dave Charles (champion of the resurgent electronic scene) the band play a great set of tracks including set opener, ‘Ready Set Go and Die’, ‘Hope and Prey’ and set closer ‘I Am the Rain’ .

Among The Echoes
Third of three, this evening, its Among The Echoes (ATE), a Synth-Rock/Darkwave band formed in 2012, in Birmingham. The line up and band’s sound has been constantly developing over the last five years. Among The Echoes are now down to a three piece with Ian Wall (Vocals), Steve Turrell (Keyboards) and Wayne Page (Guitar), but have a special guest on keys tonight in the form of Thomas Muller, who has flown in from Germany for the show. Before their set begins, an impromptu birthday announcement and presentation and a few birthday messages from friends and family including, Fiction Factory’s Eddie Jordan. (more on them later) for Ian Wall, who at the ripe old age of fifty, is still jumping around on stage.

The band open up with “Fracture”, latest single “This Is a Love Song”, and a few great covers of Fiction Factory’s “Feels Like Heaven“, Human League’s “Being Boiled”, Eurythmics “Sweet dreams”, regular crowd pleaser “Pure” (Gary Numan) and finishing the set with Sisters of Mercy classic “Lucretia”
Another great line-up at The Flapper this evening with three electronic acts of different flavours, but all putting in terrific performances and raising £1000 for the charity. Lets do it again soon. 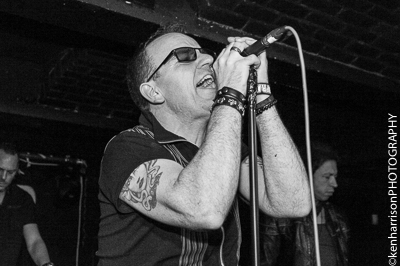