Who said the High Street was dead?? Bearwood’s inaugural Street Festival held on Sunday 11th June 2017, saw Bearwood High Street (officially known as Bearwood Road) closed off and quickly filled with people to enjoy great food, great music and performances and (by and large) great weather. From 11:30 on Sunday morning until 5:30 when the festival came to a close, crowds flocked to the high street to enjoy a grand day out. 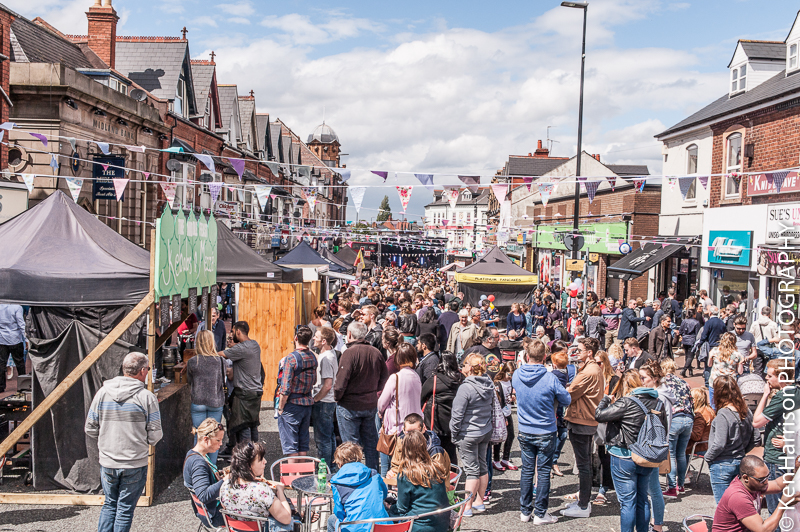 On The Main Stage outside The Bear Tavern, Sandwell’s Lord Mayor Councillor Ahmadul Haque M.B.E. formally opened the festival with a fine introduction from our MC for the day, the magnificent Dr When, resplendent in his red jacketed dinner suit and top hat. 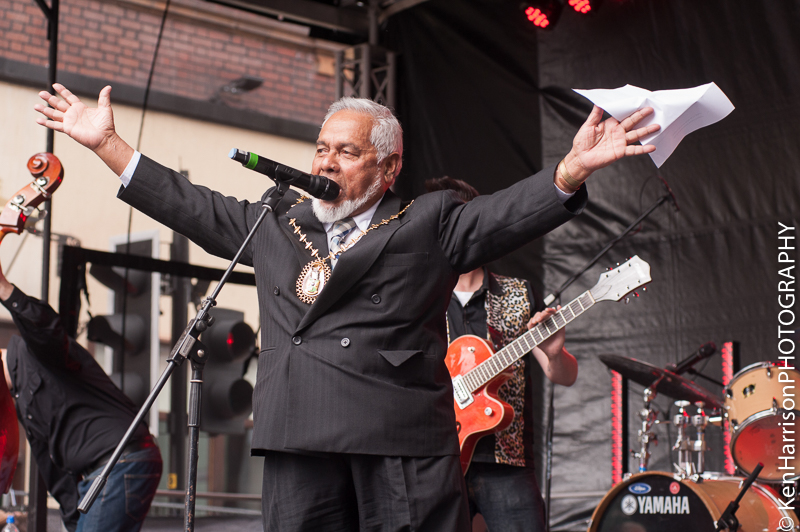 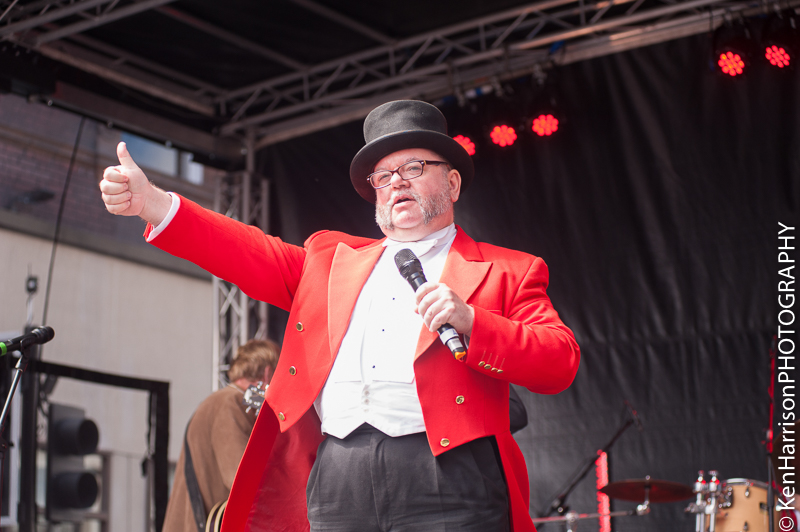 The Frenzies (Rockabilly Rebels with a cause) kicked off in high gear with a lively set of rock n roll tracks, that certainly got the crowd going. 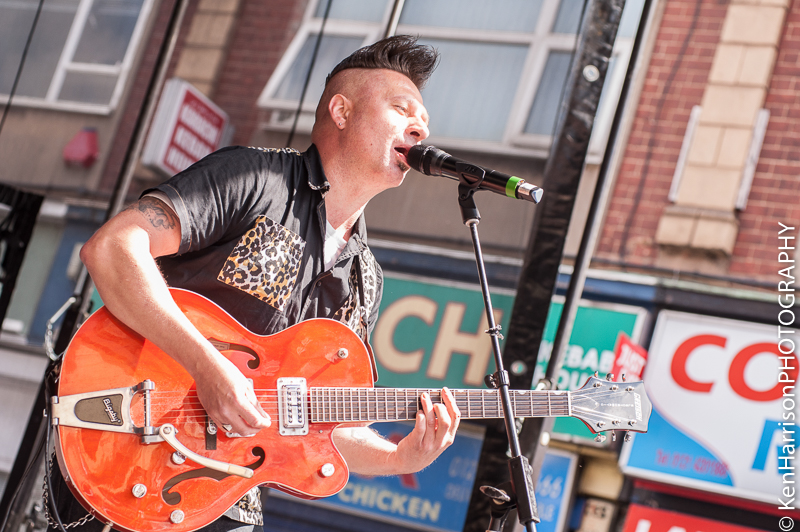 Junior Blue Notes up next, a bunch of supremely talented youngsters from the local Silvershine Jazz Club (and with a few older youngsters too) treating the crowd to some classic Jazz. 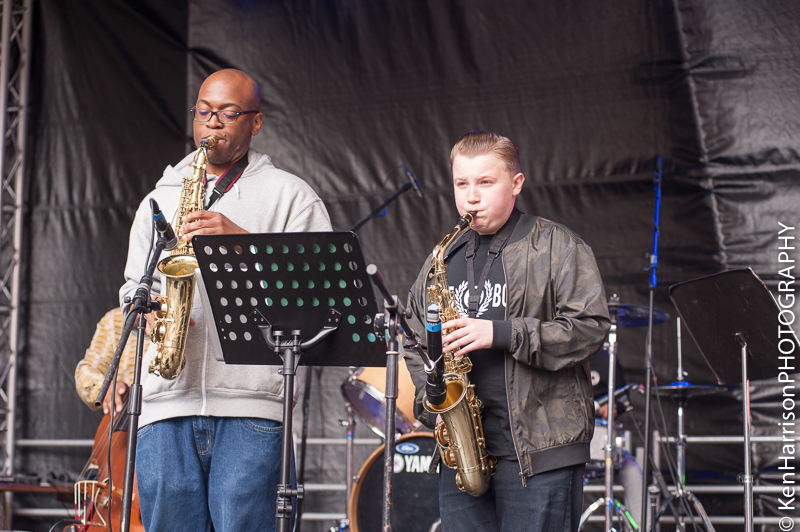 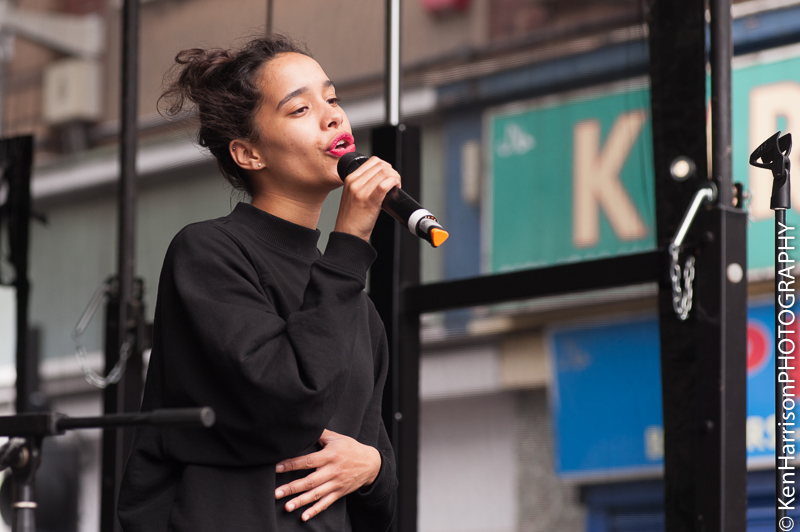 Electric Swing Circus brought us their mash-up of twenties inspired vintage sounds fused with electronics and turned up to 11. 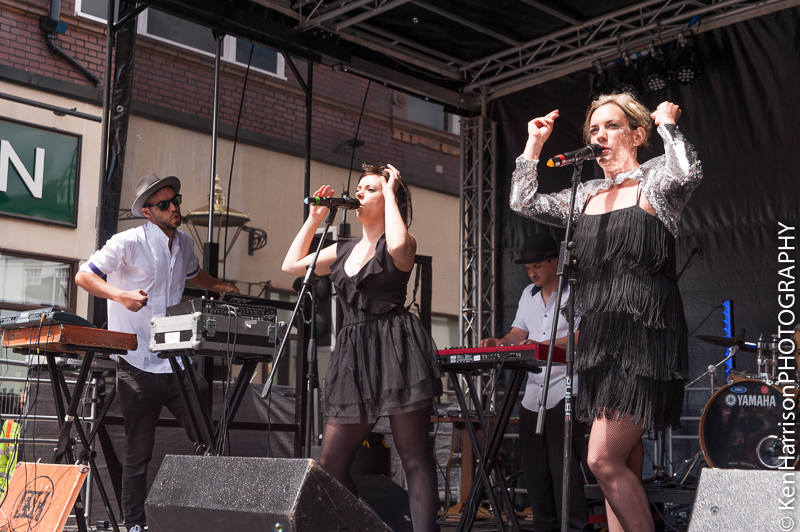 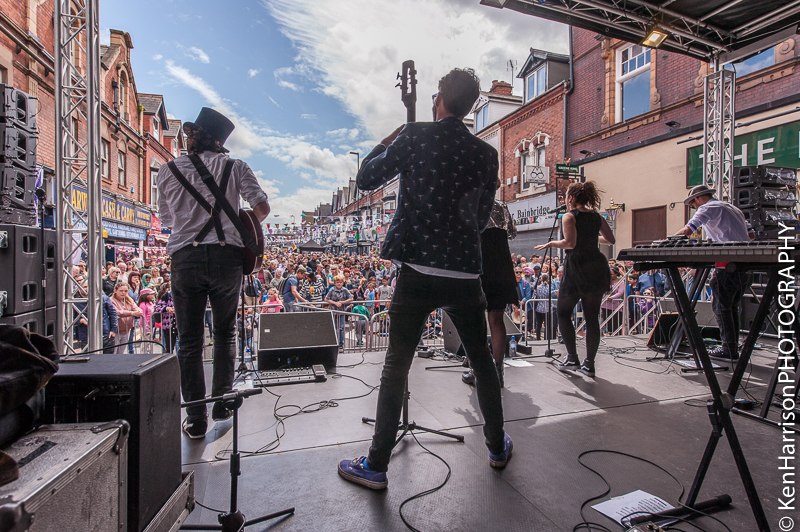 Rhino and The Ranters were a terrific act, whipping the crowd up and some great Hendrix style moves from the lead singer. 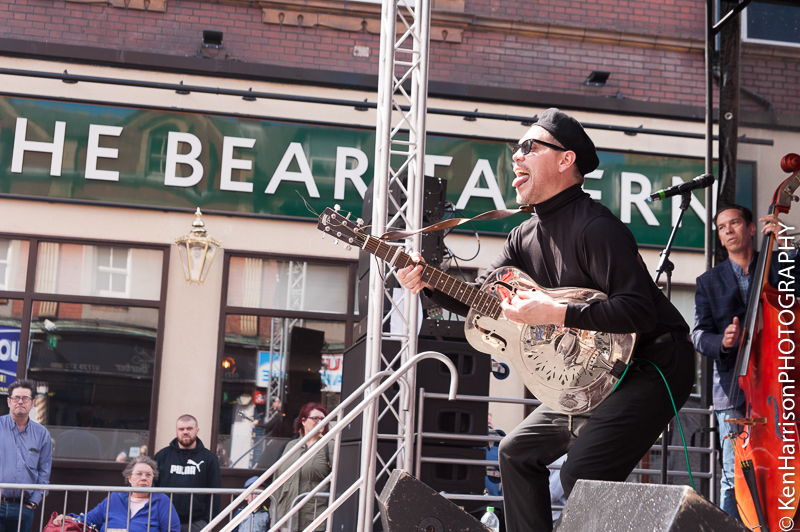 Kioko, (formerly Tempting Rosie), who have graced the Shuffle Stage before, brought the big horns out with their ska/reggae infused music, with a couple of members playing brass in the crowd, before hastily getting up on stage to start their set. 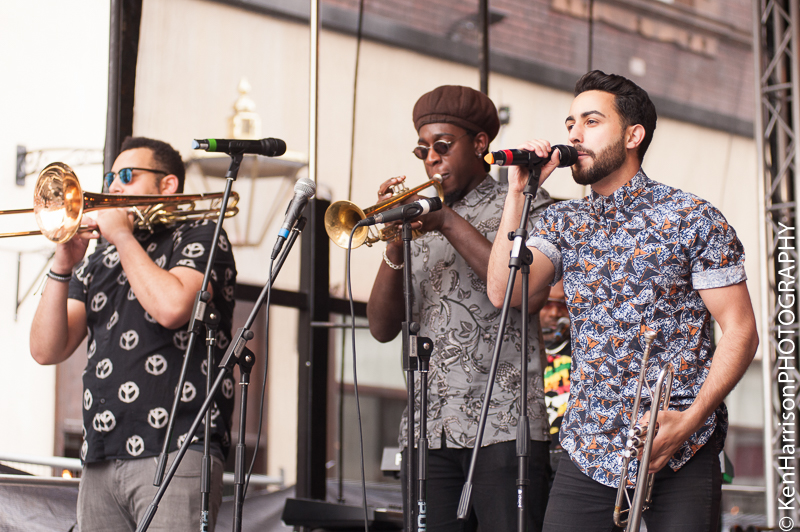 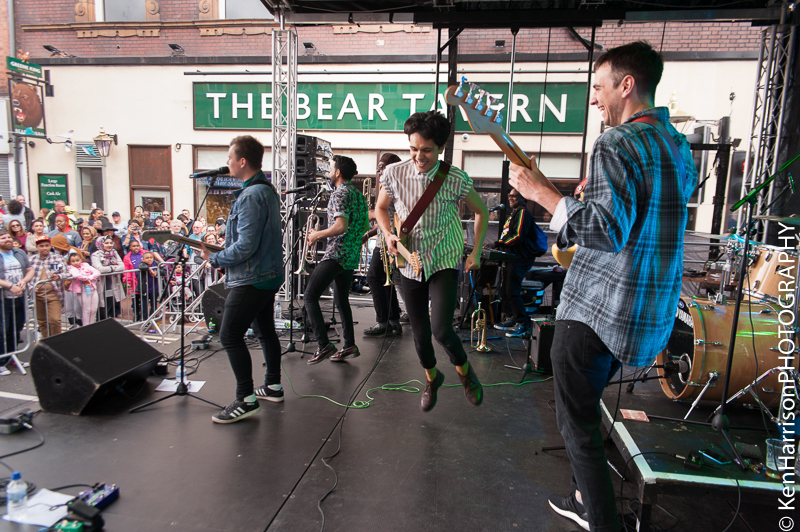 Lycio brought the stage to a close with their more chilled vibe and some great electronica and distinctive vocals from their singer. 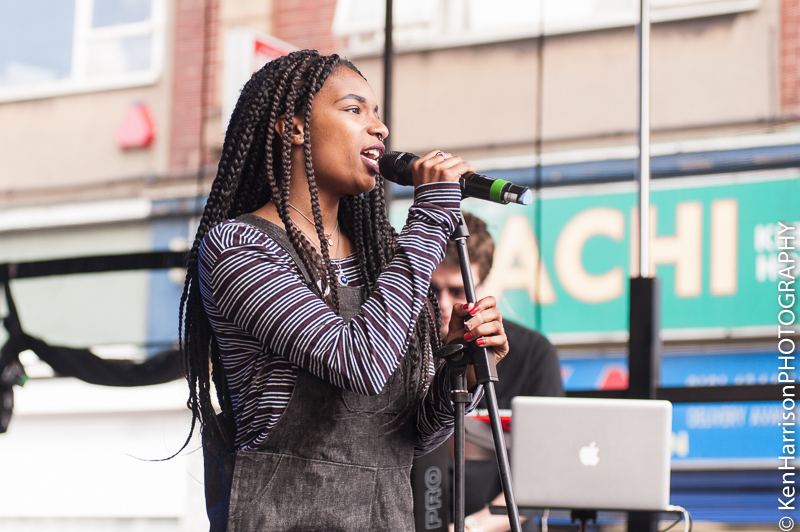 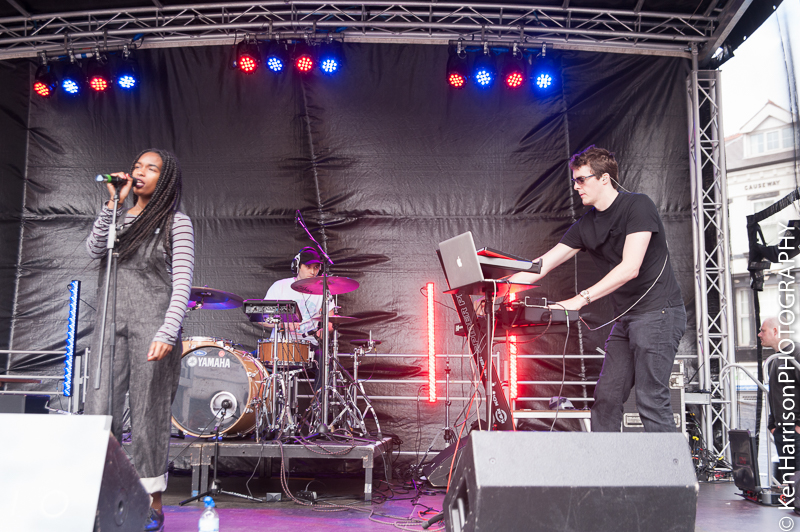 In between the acts, DJ Jon Harris kept up the momentum with some classic tracks, with some appearances by a mysterious ‘Grey Lady’ in front of the stage. 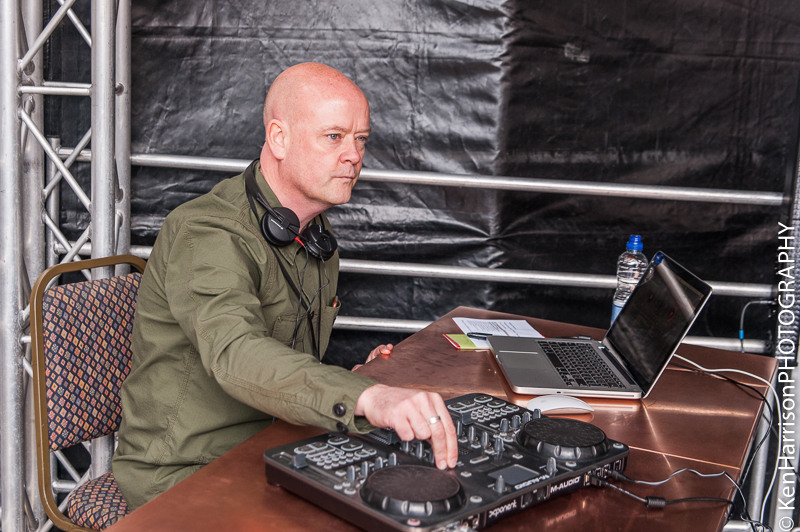 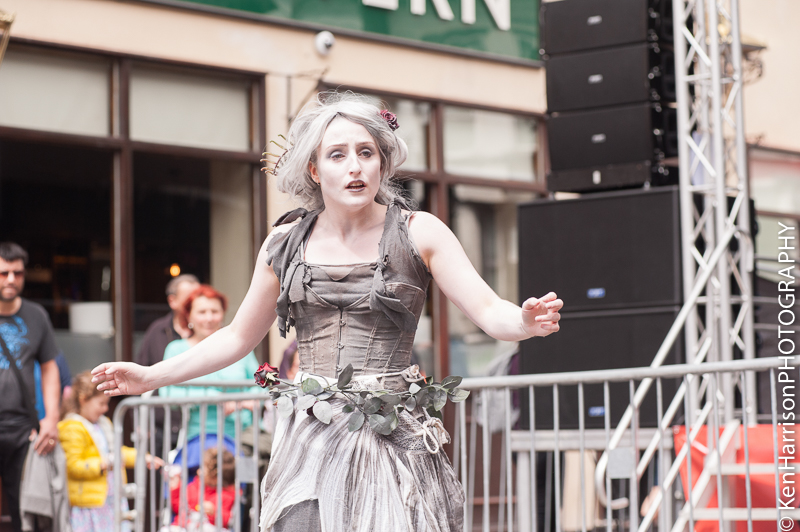 The sides of the High Street were lined with food stalls brought by Bearwood Pantry and Digbeth Dining Club. With something to suit everyones taste, the queues for food were huge, and many of the usual High Street traders had also opened up and were doing a brisk trade too, particularly one trader who sold bubble guns to many of the youngsters in the crowd. At times the air was filled with bubbles. The local hostelry got in on the act too, with both The Bear Tavern and The Midland, supporting the event too, and both pubs were full of customers for the day. Bearwood Indoor Market also opened up for the day and had many ‘pop-up’ stalls for the event. 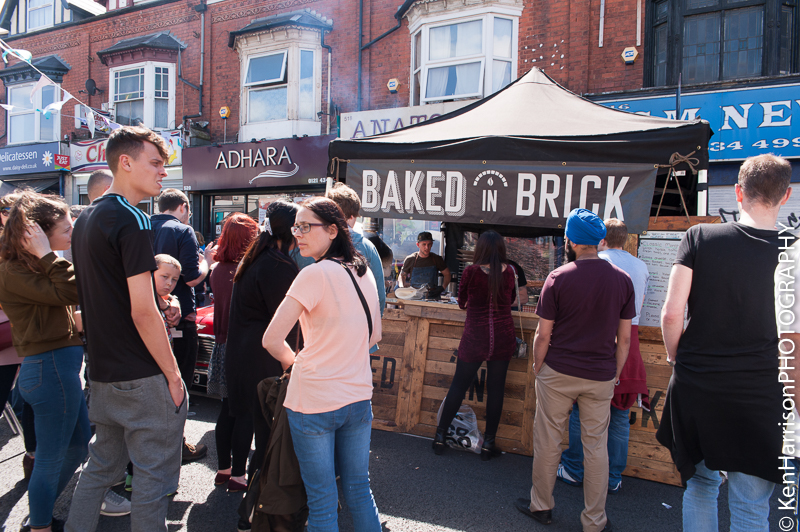 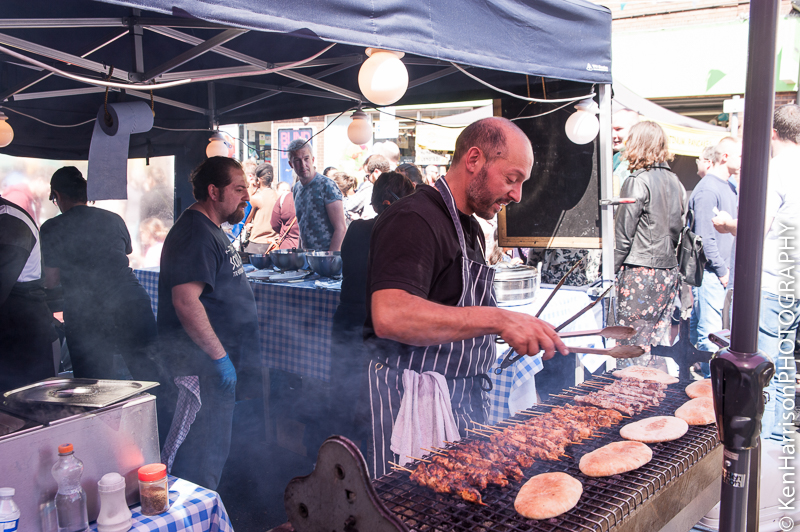 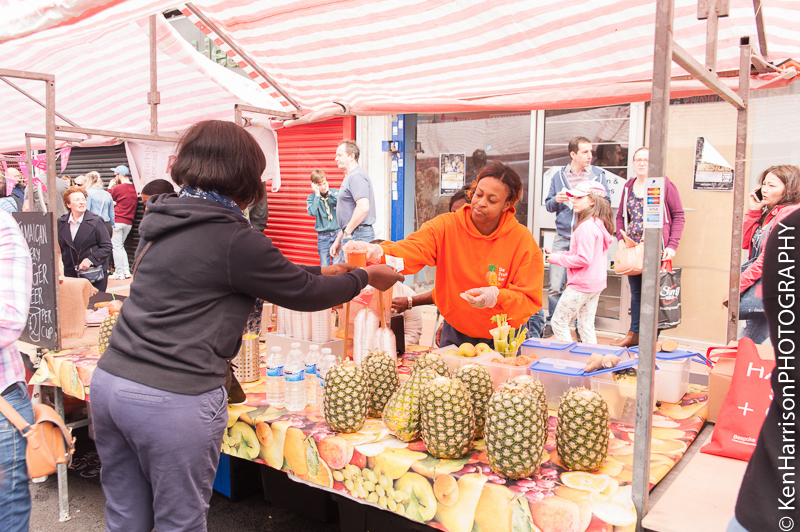 Over in the playground at Bearwood Primary School, a giant geodesic dome appeared as the gateway to the Family Zone where children had lots of fun with craft workshops from Off Our Trolley Arts, amazing automatons from Rowland Emmett (of Chitty Chitty Bang Bang fame), the brilliant Highly Sprung Performance Co and lots of themed games with Out To Play, face painting and the local Scout groups teamed up for some scout skills challenges. 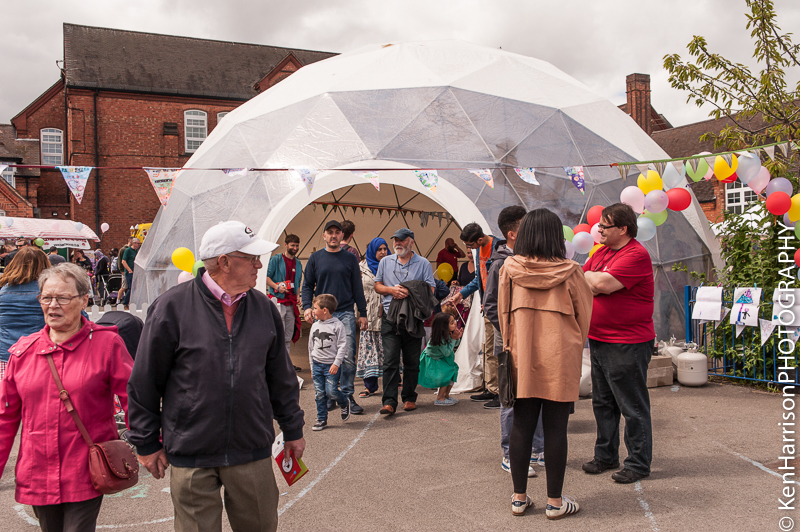 Over at The Co-Op, the Freestyle stage was a super little stage in a converted Airstream caravan, its silver body glowing in the sunshine. This stage showed off some of Bearwood’s diverse range of talent with spoken word, dance, guitars, cigar box guitar and a whole lot of great music going on whilst a huge collaborative graffiti wall took shape to the right of the stage, ably assisted by Bearwood's residents. 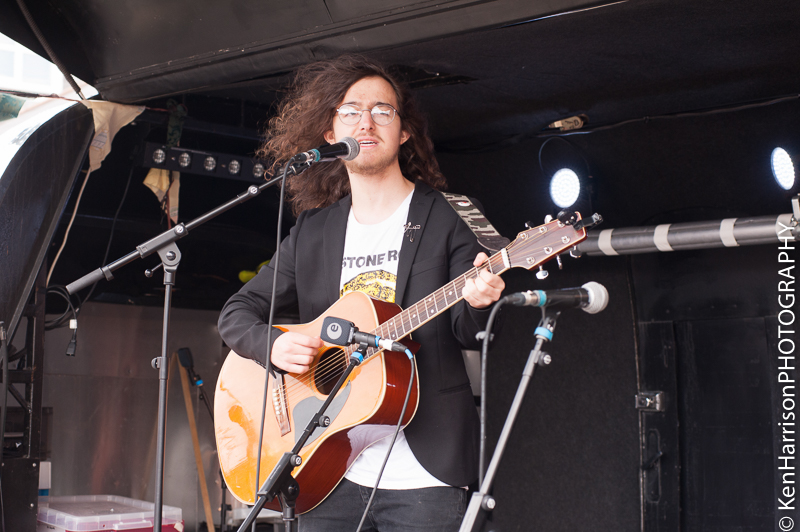 The Bearwood Bard (aka Keith Bracey) 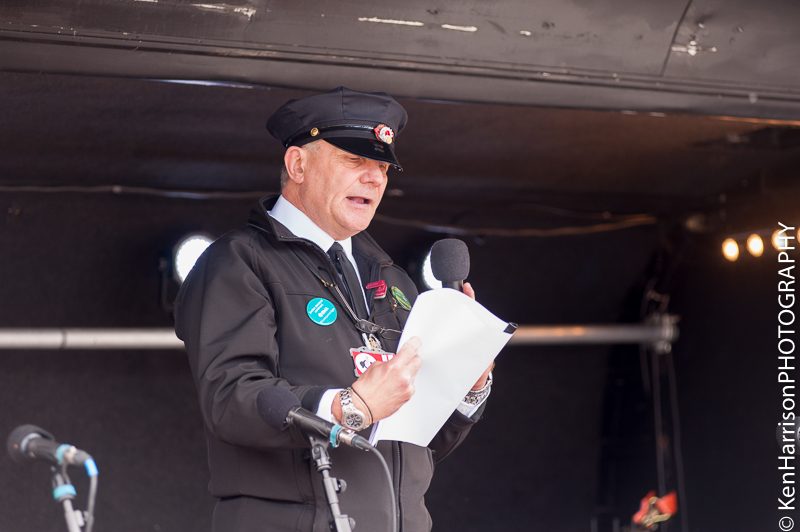 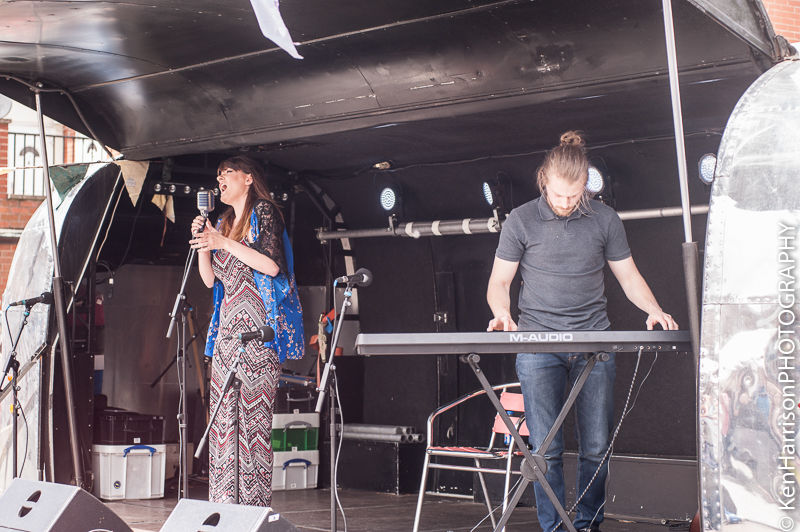 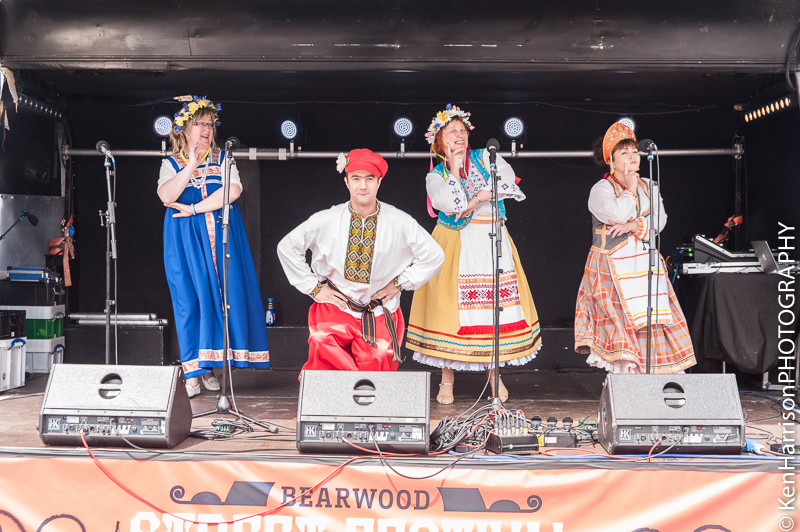 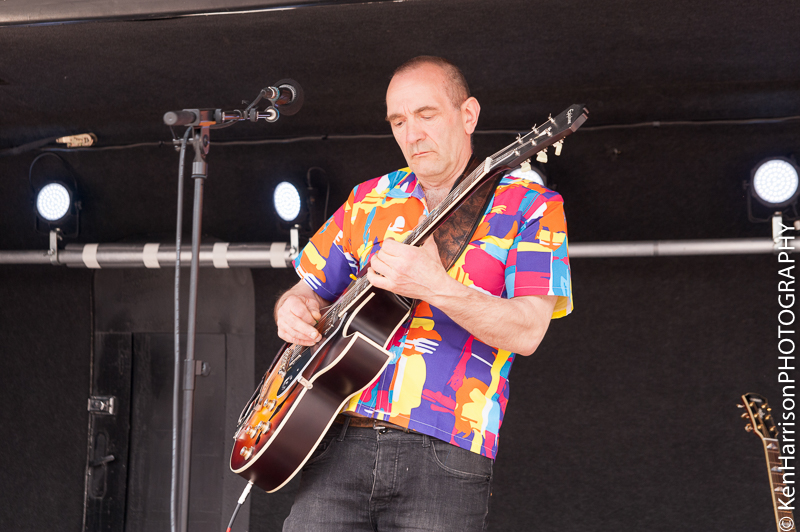 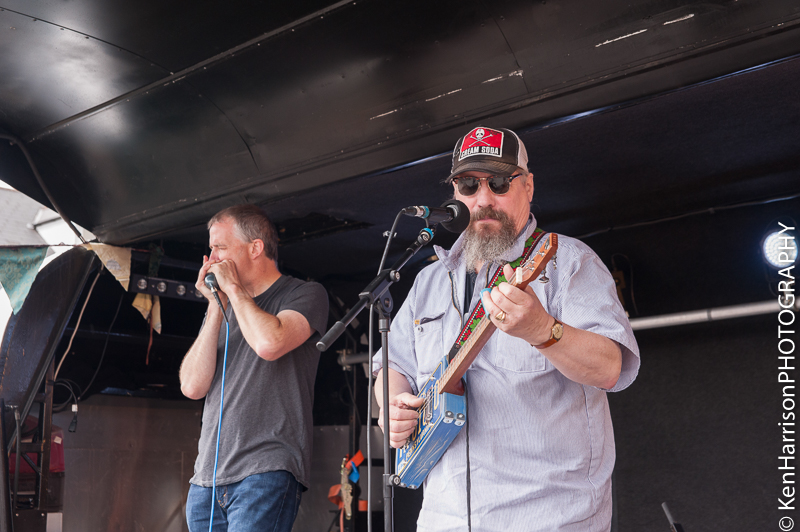 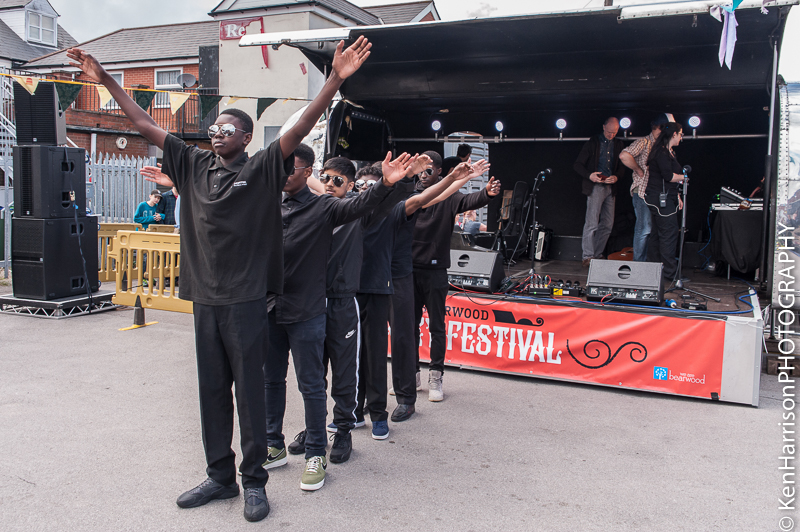 The sight of seeing Bearwood High Street filled with people having a great time was something quite magical. From the main stage outside The Bear Tavern right up to the The Freestyle Stage was a sea of people. This was a Street Festival put on by the community, for it's community. From the original seed of an idea, this event was 18 months in the planning, with funding from the Arts Council and The Lottery and support from Sandwell Council and Creative Black Country enabled this festival to take place with an army of volunteers from the community getting stuck in and working together to make something very special happen. 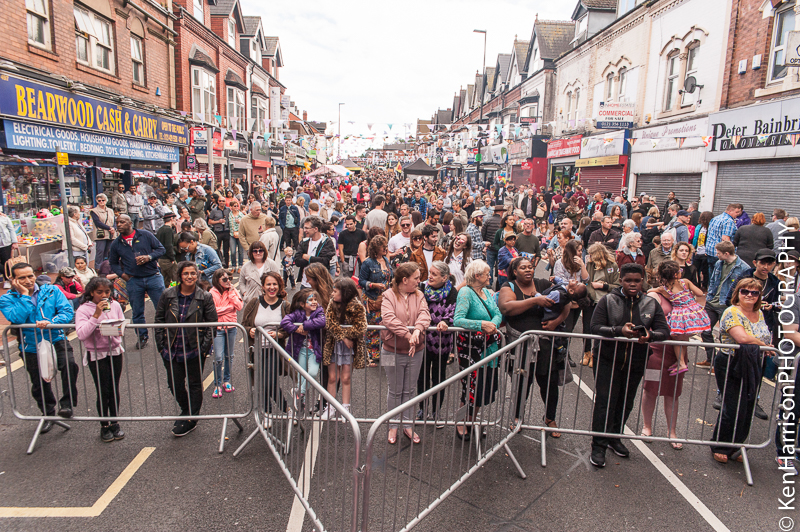 For everyone who has supported this event, we thank you.

We Are (all) Bearwood.

Which leaves one rather large question… how are we gonna top this in 2018?Follow the Bear and stay tuned for more news on future events.

For more info and updates from the day visit Bearwood Street Fest.