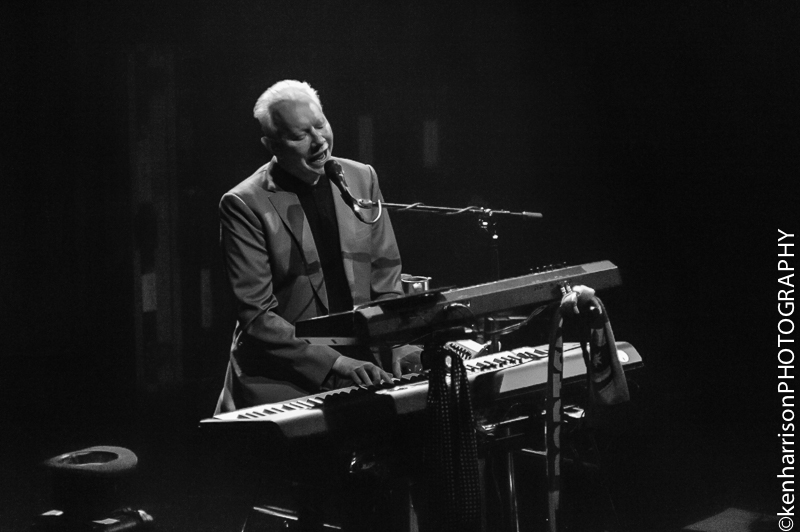 Tonight is an all too rare opportunity to see Joe Jackson, singer, songwriter, pianist and writer, on his “Fast Forward” UK Tour. Jackson arrived in the New Wave/Post punk scene in 1979 with his “Look Sharp” album containing the witty and acerbic “Is She Really Going Out With Him?” Born in Burton, Jackson grew up in Portsmouth, and is now Berlin based via London and New York. The show is a sellout, and the older crowd (with a few youngsters dotted around) eagerly await the start of the show. To get the crowd in the mood, we are treated to some old time jazz to warm us up ready for the show. I’m hoping for some “Jumping Jive” at some point this evening.

At just after 8.20 pm, Jackson arrives on stage, to loud cheers and applause, “sharply” dressed in a suit, and sits down at his piano to left of the stage.  The show opens with “It's Different For Girls” from 79’. “I’m the warm-up tonight, the band will be coming later” Jackson explains. The first set of songs are just Jackson on his piano and his vocal. Jacksons vocals always had a distinctive sound, and from the first song out, it is clear that at 61 he still has a good voice, instantly recognisable as Jackson’s. 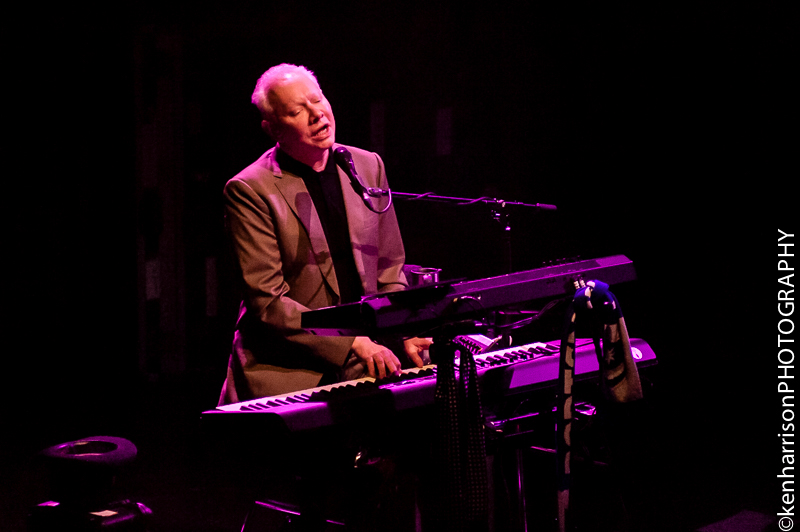 “Home Town” is up next, followed by “Be My Number Two”. Jackson covered Joni Mitchell’s “Big Yellow Taxi” for an album, and this is his take on Mitchell’s classic 70’s track, as “if the song was recorded by a piano player from New Orleans”. Now for an album plug; Jackson explains to the audience that the album “Fast Forward” was originally a series of 4 track ep’s, recorded in different cities with different musicians, but were joined together.  The four cities on the album are New York, Berlin, Amsterdam, and New Orleans. The track “Fast Forward” is introduced by Jackson as a “fast forward look to the future, to make sense of the time you live in”. More detail from Jackson as he begins playing that this track has a “Drum Loop”; part way through he fluffs a line, but recovers and finishes the song unscathed.

Up until now, Jackson has been alone on stage, playing piano and solo vocals. He is joined by original Bass player Graham Maby who starts the bass line for “Is She Really Going Out With Him?” to loud cheers from the audience. This is a much loved song and the audience join in with gusto at points during the song;

Jackson “Look over there”

And so it goes on during the song, with the audience joining in. The drummer (Doug Yowell) arrives during the last verse quickly followed by Teddy Kumpel on guitar. “Real Men” from 1982’s “Night And Day” album is up next with Kumpel’s wailing guitar replacing some of Jacksons original vocal. “You Can't Get What You Want (Till You Know What You Want)” an uptempo track, with the band bathed in yellow light.  Time for another album plug, this track “Kings Of The City” written in New York about people coming to the Big City. “A bittersweet song, like dark chocolate” Jackson elaborates.  “People coming to the city find some things and lose some things.” “Don't see the stars anymore”. The song ends in darkness as the lights go down.

Jackson introduces the next song from The Amsterdam Sessions,  “A Little Smile” opens to big cheers from the audience, a much rockier track followed by the “tell the world to Fuck Off song” “Neon Rain”; a very angry, aggressively played track with some head banging from Jackson. Something softer as Jackson introduces the next track as being from the reunion album of 2003, “Volume 4” where the original band members reunited to record. Jackson talks about “Love At First Light” as a romantic song, perhaps the start of something. Waking up in bed with a headache in the  morning with someone whose name you don't know, or even remember how they got there. The audience are loving this one.  Back much further to 1982 and the “Night And Day” album for “Another World” with much applause for Maby’s bass solo.

With a spotlight on Kumpel, we head back to Jackson’s debut album “Look Sharp” for “Sunday Papers", with Jackson on melodica. Back to the new album, and Jackson introduces the next song as a cover version of the Television song “See No Evil” from 1977.  Jackson chats again, about the recording of part of the album in New Orleans. “Its been a long time since I played in Birmingham and I don't take it for granted. It could have been two men and a dog at the back”. The band then play “Keep on Dreaming”. Jackson introduces “Stepping Out” as an “Ode To Joy for all you Beethoven fans” and plays it slow to close the set. The audience erupts in applause, and those seated up in balconies get on their feet to show their appreciation. 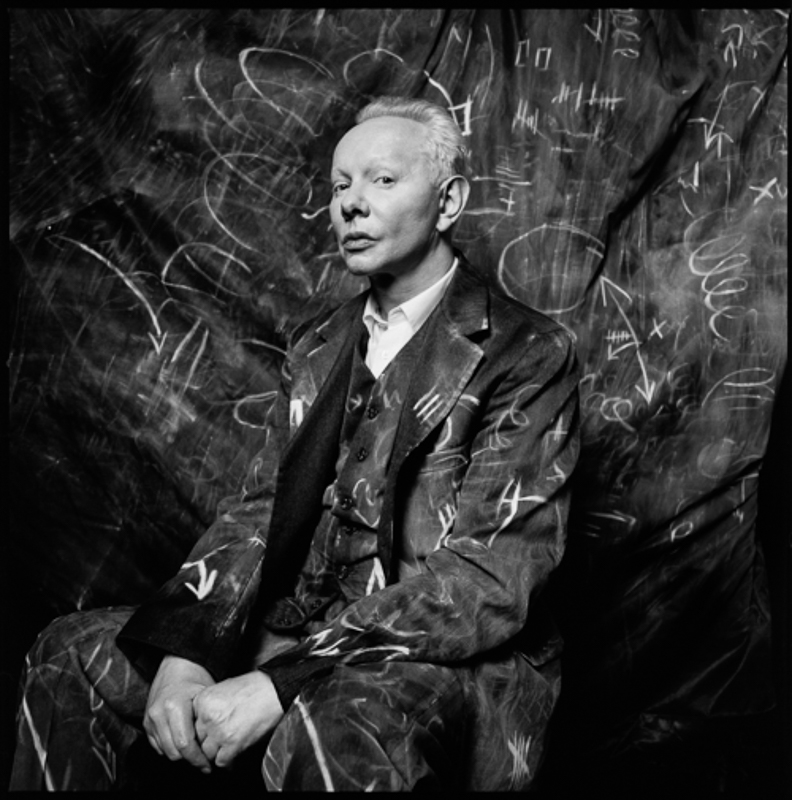 As the band return for the obligatory encore, Jackson picks up a top hat, which has sat next to him throughout the show. “This is cover version du-jour” as he pulls out a note from the hat. This is a little less sophisticated than Elvis Costello’s “Spectacular Spinning Songbook”, but works just fine. And the lucky song is “It Don't Mean a Thing (If It Ain't Got That Swing)”, the Duke Ellington duet with Iggy Pop which Jackson recalls as “funny” and then quips “He's (Iggy) not here”. “One More Time” follows with “Slow Song” to close the show, with the band leaving one by one, Yowell, Kumpel, then Maby, as Jackson closes the song and the show, solo. As Jackson stands to leave stage, he lifts his hands from the keyboard and the notes are still playing, the audience howling as he looks out to the crowd.

Tonight’s show was a delightful trip from Jackson’s debut in 1979, right up to the current day with a few stops in between. The band’s performance was excellent, even with a couple of bum notes from Jackson which were humorously shaken off.  Jackson is witty, warm and engaging, happily chatting with the audience during the show.  Jackson is a gifted songwriter, and extremely talented musician who probably deserves more commercial success to mirror the critical acclaim received over the years. Let’s hope its not long before we see him back again. 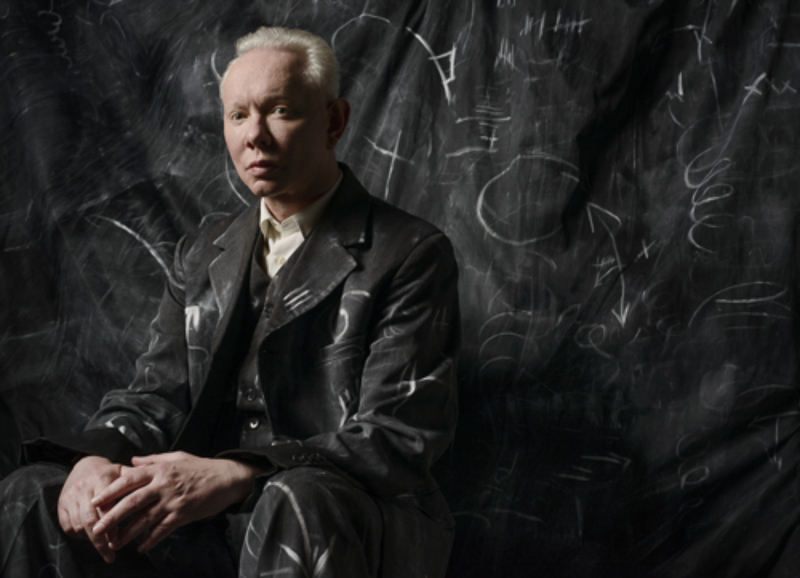 It's Different For Girls
Home Town
Be My Number Two
Big Yellow Taxi
Fast Forward
Is She Really Going Out With Him?
Real Men
You Can't Get What You Want (Till You Know What You Want)
Kings of the City
A Little Smile
Neon Rain
Love at First Light
Another World
Sunday Papers
See No Evil (Television Cover)
Keep On Dreaming
Stepping Out