Emerged from a now iconic music scene in Seattle. Tick. Gained international success in band from said scene. Tick. Twice and ongoing. Tick. International and acclaimed solo success. Tick. Member of more than one supergroup. Tick. Multiple Grammy awards. Tick. we could gone on - instead we’re hear to listen. To the rock voice of a generation. Laid bare, just the main man, his voice and guitar - Chris Cornell is back with 'Higher Truth' Songbook style. 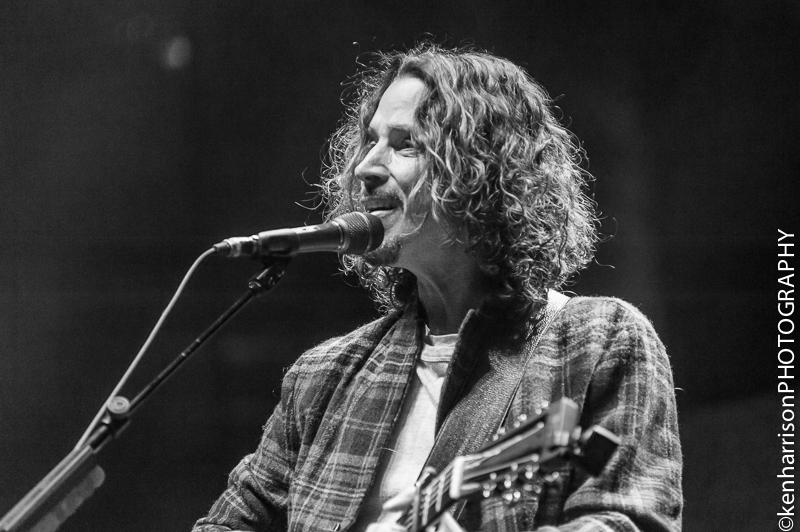 Tonight’s gig is unsurprisingly sold out. And we have a warm up in Fantastic Negrito. This guy (real name Xavier Dphrepaulezz) has had one hell of a journey. From a misplaced childhood in Oakland Massachusetts, this multi-instrumentalist had a near death encounter with masked gunmen. He upped roots and left for L.A. Then big time manager, record deal, and creative death - avoiding death by a whisker in dreadful car crash. He turned to the blues, the DNA of American music and the incarnation of Fantastic Negrito. To quote his Facebook: “When you listen to Negrito, you’re invited to hear the story of life after destruction. Your dream can die. You probably will give up. But from there, you can start everything over.” 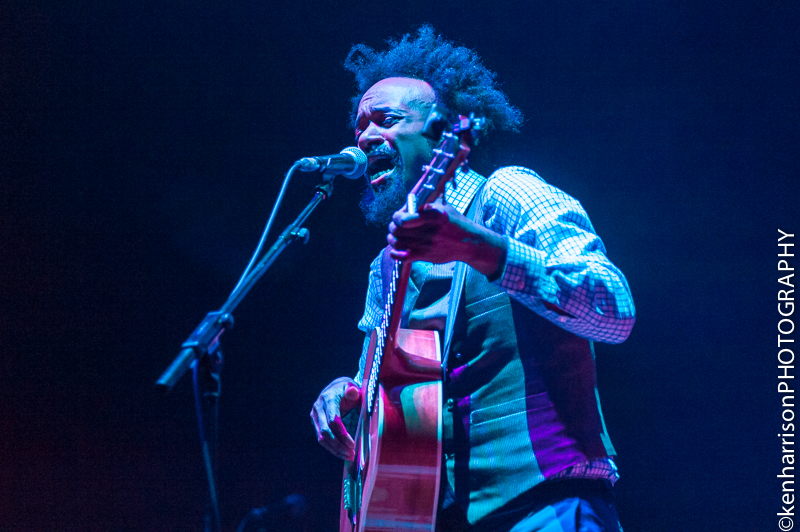 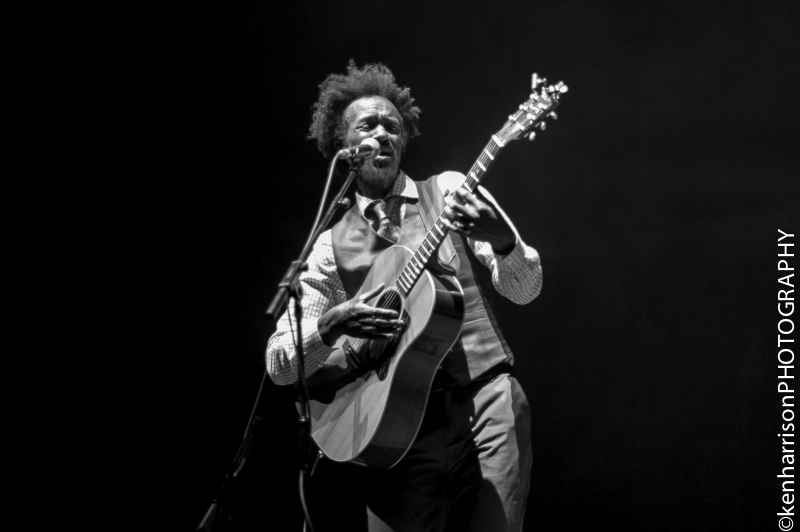 So he tells us he’s been waiting all his life for this - he’s been to Birmingham Alabama, he’s now in Birmingham, England. He’s full of the blues, soulful - whitty and fun in between songs -   him and his guitar and L.J. on keyboards. “What did you do with the bad shit? You roll it up into good shit and smoke it…” and he takes us into the menacing, mesmerising and dark ‘Honest Man.’ A cover version (he doesn’t like to do them for fear of failure)  a cover of US folk song - made famous by Lead Belly (and the painfully emotional rendition by Nirvana as part of their ’93 MTV Unplugged set)  ‘In The Pines’ / Where Did You Sleep Last Night / Black Girl.’ He does it justice. This is a man who’s lived a life and who’s performance of traditional American Blues brim with a huge amount of emotion. 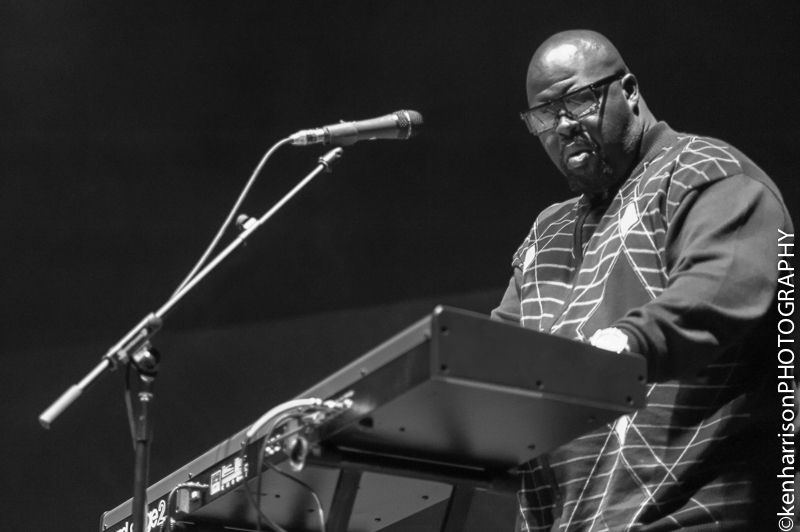 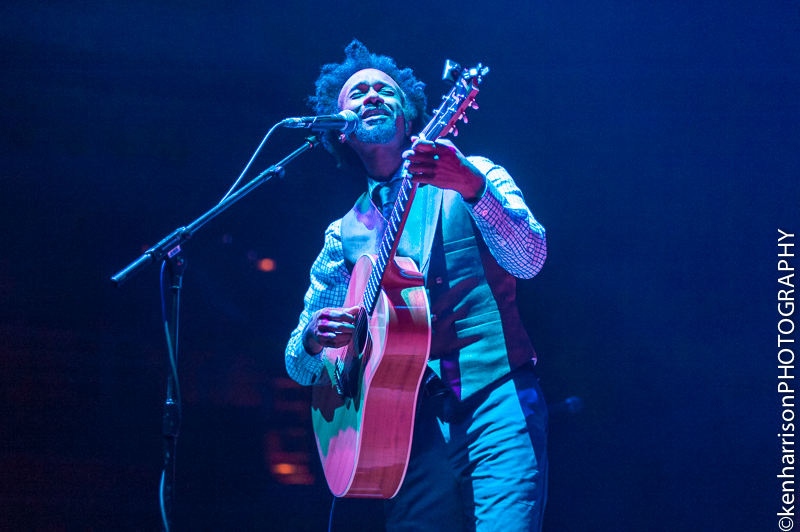 Ok. And now to the main man. Cornell started on this journey about five years ago. Indeed we reviewed him last time he brought his Songbook to Birmingham. Cornell, however appears to have forgotten. “Birmingham ! How we doing? This is a crazy place…. like an inverted cruise-ship…or a tribunal for the sub-plot of a Star Wars film....” (referring to the deletable venue). As said, he forgotten he’s played here before (the crowd remind him of the fact) We forgive him - this guys tours relentlessly and he tells us he has a terrible memory. He believes this is the city of music ( a nod to our local legenadry rock gods) and then refers to Duran Duran  - not known for their rock and roll behaviour ala Sabbath…. 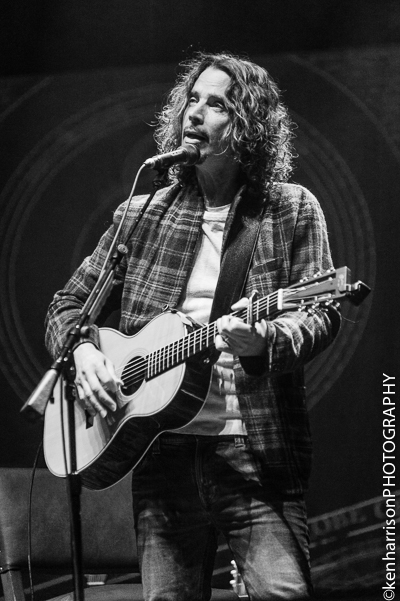 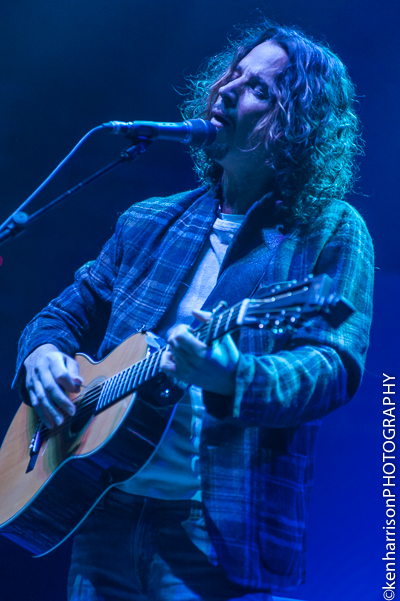 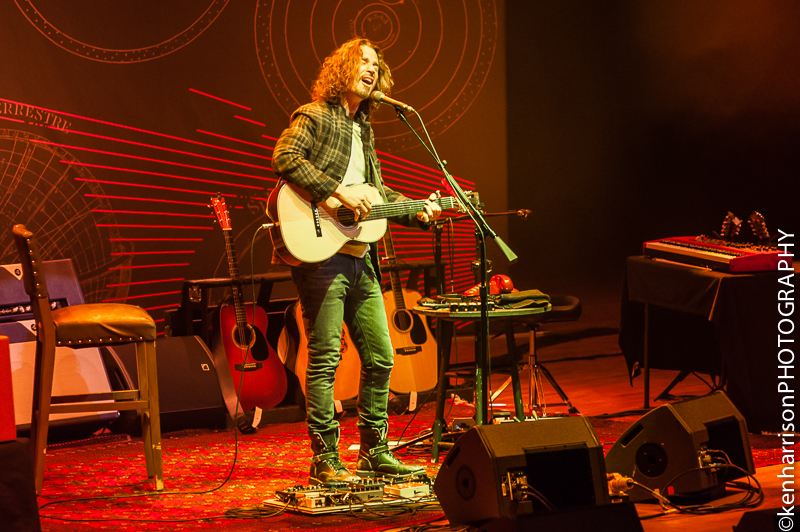 Brian will be joining him for a few songs on stage tonight. Double bass, mandolin usually. And we start off with ‘Before We Disappear’ from critically acclaimed new album ‘ Higher Truth.’ The album makes an appearance as it quite rightly should; Brian gives us his mandolin on ‘Nearly Forgot My Broken Heart.’ Cornell's set tonight covers all his incarnations and journey through music. ‘Can’t Change Me’ - his first single after Soundgarden split (for the first time). 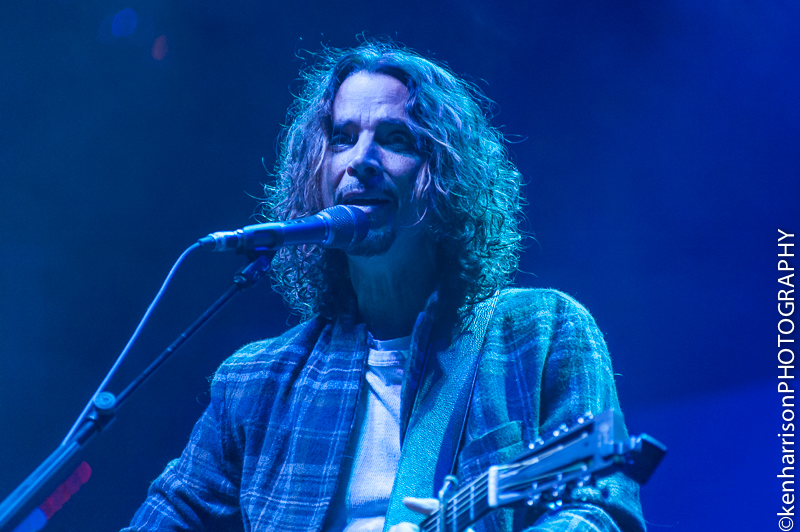 Cornell is chatty and engaging, totally confident in this laid bare approach - just his voice and guitar (and occasional Brian) and is invariably up for cover versions. The talented bugger pulls them off every time. As an acknowledgment to the shock of the loss of the legend that was Prince he gives us his take on ‘Nothing Compares To U.’ Commentators have committed that this is in the top five of the circulating cover versions currently doing the rounds and he does it more than justice.

Neil Young plus an harmonica headset ‘Times They Are A-Changing’ - he feels is appropriate as as he comments on the Donald Trump madness going on in the US (too boos and hisses from the audience) - he's a wandering minstrel on stage.  He reckons his own songs are dready and  he’d like to be upbeat and hopeful. So to ‘One’  - music from U2, lyrics from Metallica. Maybe not so upbeat and hopeful and a mash-up that surely should never work - but hell, it powerfully does.
Psychedelia - his take on The Beatles ‘A Day in The Life’  darker, Brian on double bass - cranked up into earth shattering reverb. 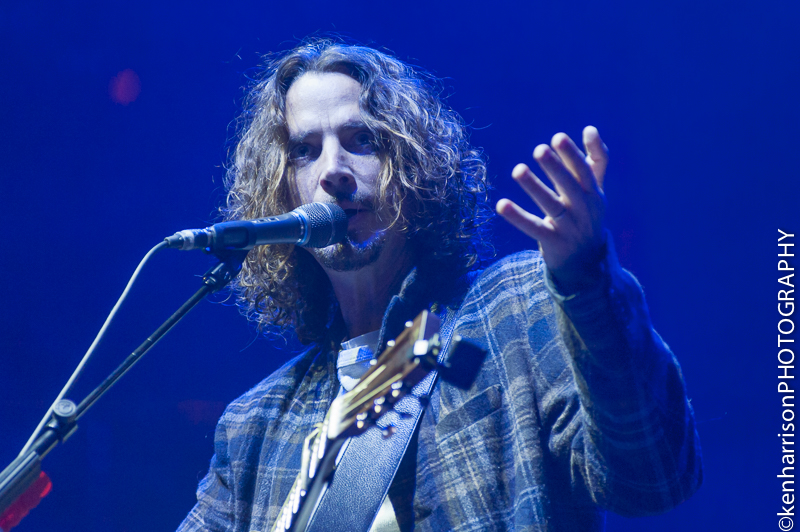 Soundgarden times - Brian is back - bring dark accompaniment to ‘Fell on Black Days.’ And once again, ear shattering 'Blow Up the Outside’ as the song cranks up, with looped reverb. ‘Rust Cage’ maybe less venom - no less still powerful. ‘Black Hole Sun’ -  the scream in his voice comes from nowhere.

As the set rolls on;  the 3,000 rock fans are mesmerised. “Hey Chris, you’re showing off now...” shouts a punter. And indeed this stripped back voice only shows the power, emotion and jaw-dropping ability to reach all those highs and lows. Wowsers. 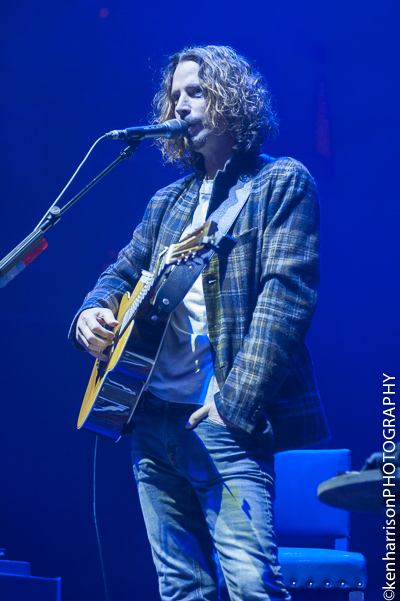 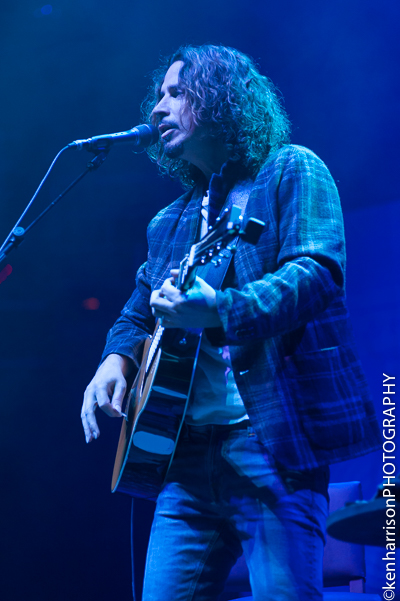 And to the first “supergroup” prior to fame - the Soungarden / Pearl Jam mix that emerged from the death of their friend - Andy Wood of Mother Love Bone. Temple of The Dog tracks feature several times tonight ‘ Say Hello 2 Heaven’, ‘Call Me A Dog’, ‘Wooden Jesus’ and ‘Hunger Strike ‘ sans Vedder but still as powerful.

Supergroup mark II - this time with Rage Against the Machine - Audioslave. “For everyone who wants to avoid everything and everyone….” ‘Doesn’t Remind Me’ and a little later in the set ‘ I Am The Highway.’

Solo and to Bond. James Bond. A revitalised Bond aka Daniel Craig and Casino Royal gave us Cornell and ‘You Know My Name.’ And from another  and a plead to stop slavery and human trafficking - from the movie Twelve Years A Slave ‘ Misery Chain.’

Two hours later and a break. “I guess I’ve played too long….” and Temple of the Dog’s  ‘Call Me  Dog.’ Dedicated to Paris and Brussells (the horrendous terrorist attacks) he points out there is mostly good  people in the world; his title track of his latest album ‘High Truth.’ 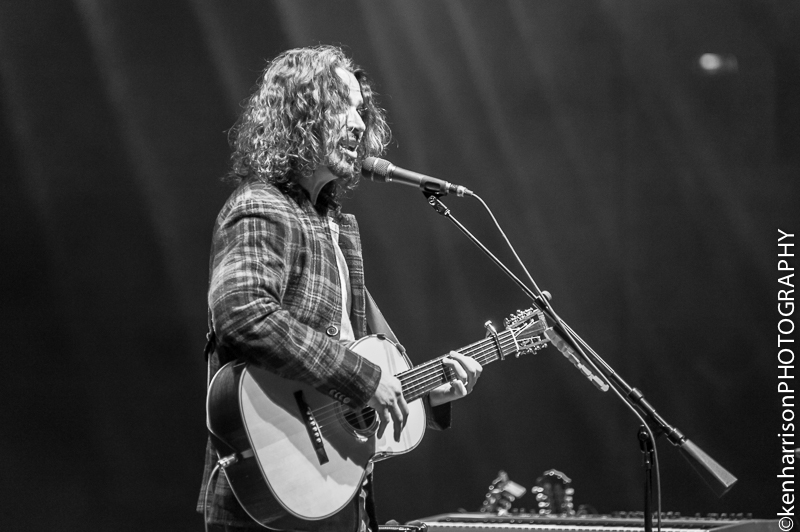 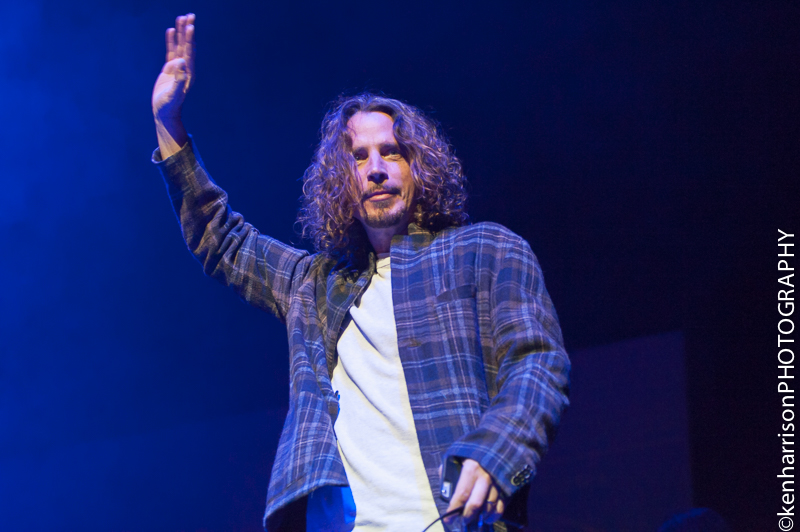 Jaw-droppingly incredible.  A place full of rockers,  sat, in silence, mesmerized by the performance.  Cornell held the crowd in the palm of his hands; time passed so quickly - to see one of the best voices in rock, stripped bare, just acoustic, in a true venue fit for purpose is (once again) pure treat.

Cornell is edgy. He’s totally comfortable in his own skin. He truly owns what he is doing - you don’t do the cover versions he does without that ability to commit. He writes his own rules. And ridiculously as the two hour set rolled on his voice got better and better. This guy spent years screaming - yet tracks from the early 90s should as fresh today as they did then. Tonight there was a true rock god in our presence. Catch him while you can - you will seriously be blown away.

Call me A Dog  (Temple of The Dog)
Higher Truth