23/06/2016
Rich Kids and The Professionals play a one-off double headlining show at the O2, Islington on 23rd June 2016
Gig review and  photography by Ken Harrison

Punk. Post Punk. New Wave. Tonight gives us an eclectic mix of what happened to the ‘others’ after the Sex Pistols. Glen Matlock gathered his buddies and formed Rich Kids. Steve Jones and Paul Cook formed The Professionals. Both ventures were a tad short-lived - however, tonight, for a one off only, both bands will take to the stage in London in an intriguing double headliner, featuring a few familiar faces. 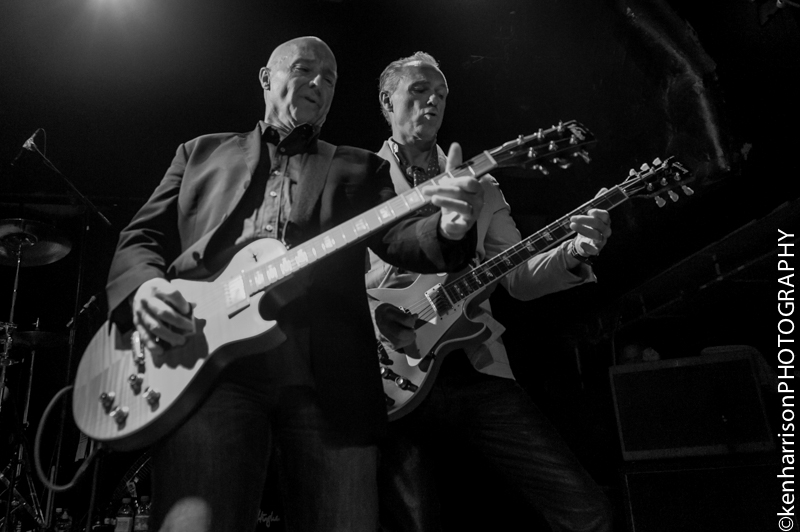 So let’s roll back to 1977. Glen Matlock walks from the Sex Pistols. Forms band with one Midge Ure (who went on to front Ultravox) and Rusty Egan (who founded Visage with Ure, Steve Strange et al), Steve New, and for a brief time Mick Jones (The Clash). Rich Kids. In their brief spell together the release one album and three singles. However they weren’t without influence in the day - once of the leading  British exponents of the power pop style, blending influences from 1960s acts such as Small Faces and The Who with more recent punk rock sounds. 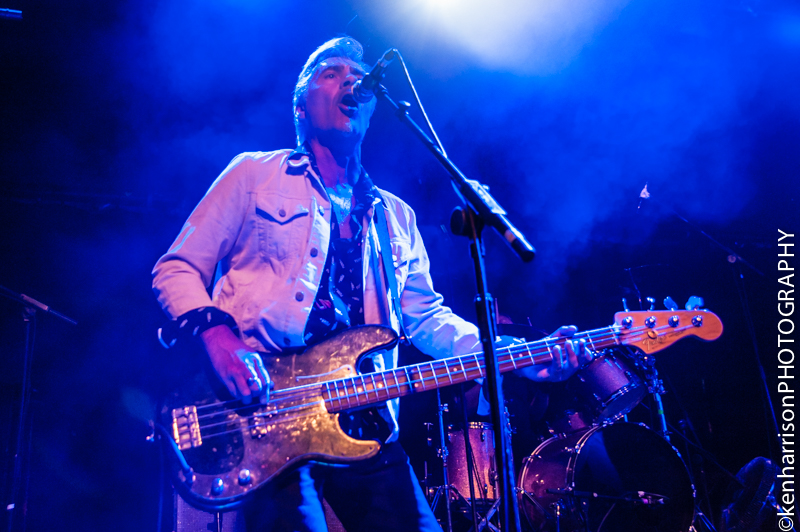 With only one single making the Top 40 in the UK Singles Chart - the self titled ‘Rich Kids’  - the band join the list of one-hit wonders - however in their time they did 2 radio sessions with John Peel, an appearance on ‘Top of the Pops’ and a short-lived TV Show hosted by Peter Cook.

And so Rich Kids return. For a one night special, re-scheduled to this Islington venue, with Gary Kemp on lead guitar and James Hallawell on keyboards - a double headliner, sold out too, with.....

The Professionals. This band emerged from another couple of former Pistols - Steve Jones and Paul Cook - as the legendary band imploded. First single released in ’80 “Just Another Dream’ made 43 in the singles chart, and after a number of legal and other difficulties they eventually released their album ‘I Didn’t See It Coming’ in November ’81. Further difficulties including a car crash and drug addiction meant that US tours and other opportunities hammered their prospects and the band broke up the following year. 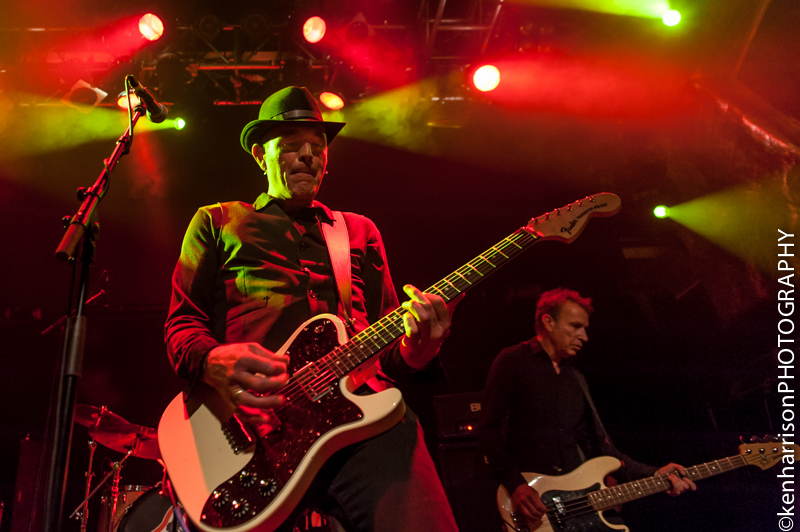 Its an interesting crowd tonight, most having fought through the storms to get to the venue. The audience of old Punks, New Wavers and a few celebs including Marco Pirroni (Adam & The Ants) Kevin Rowland (Dexys), Spizz Energi and Gary Crowley that I could see from behind the safety barrier. 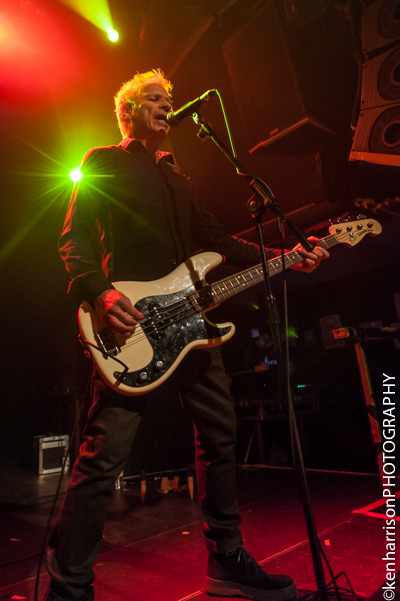 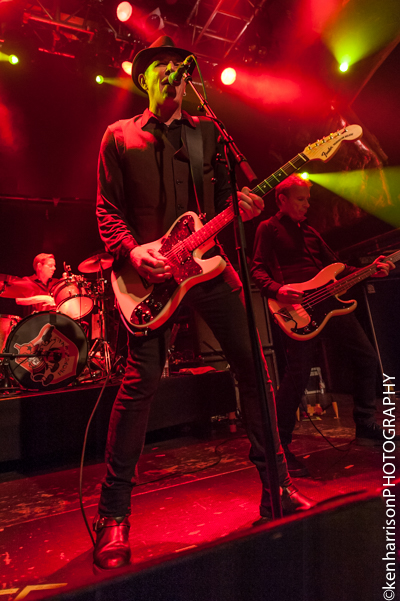 First up its The Professionals with Paul Cook taking his place on the drumstool, Ray McVeigh on rhythm guitar, Paul Myers on bass, and Tom Spencer on guitar and in the absence of Jones, vocals. At 8:10 The band come on stage and open with "Just Another Dream", "Northern Slide" and "Payola" and then "Too Far To Fall" well played punk music, like it was (almost) 1976. These seasoned "Professionals" are very slik, but the audience haven't yet warmed up, Spencer quips, "Don't save it all for The Rich Kids". Next we get Crescendo, another track from "I Didn't See It Coming", and the audience are starting to thaw out a bit, we're getting a few singing along and pointing to the band. "So we're playing new stuff" Spencer tells the crowd, for the "New Generation" and then we're treated to a boisterous rendition of "Friday Night Square" 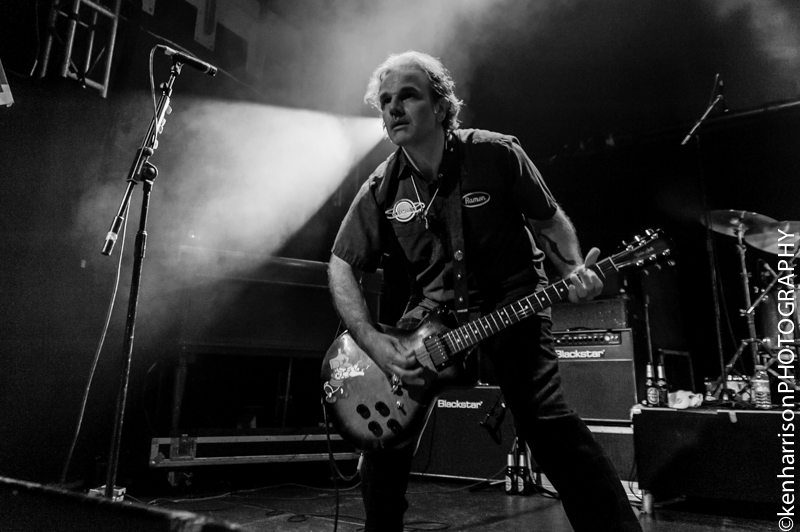 Spencer's on the mike again "so thats the new stuff, now it's 100 miles an hour until the end with the old stuff", and launch into "The Magnificent" which receives plenty of cheers from the audience. Spencer on the vocals works well, Steve Jones might have his work cut out if he decides he's coming back, Spencer jokes (or does he?) that Mr Jones might punch me off stage one day" More cheers and whistles from the audience for "Join The Professionals" Spencer reckons "we're winning over these Rich Kids fans", the crowd are certainly in the game now. "1-2-3" is introduced with "This one you might know" and the crowd are still with them. Nearing the end of the set and "we've got time for two more... you can't call us the support act as we're first on" 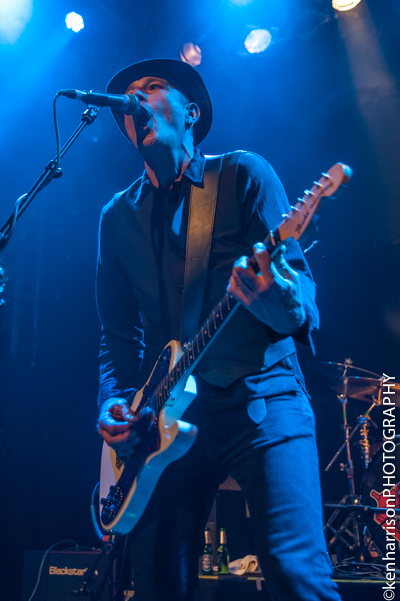 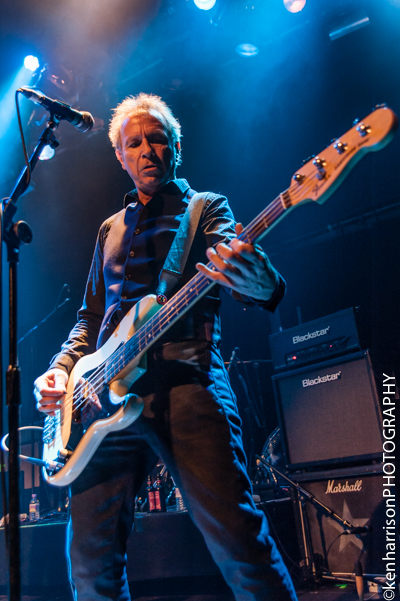 Their set finishes with "Kick Down the Doors" from the debut album and finally with the Sex Pistols "Silly Thing" which closes the set on a high. A slightly shortened set, at around 45 minutes, but very sweet for the crowd (Madhouse was cut from the set due to the slightly delayed start) As the band leave the stage, the crowd get a big grin and thumbs up from Cooky. 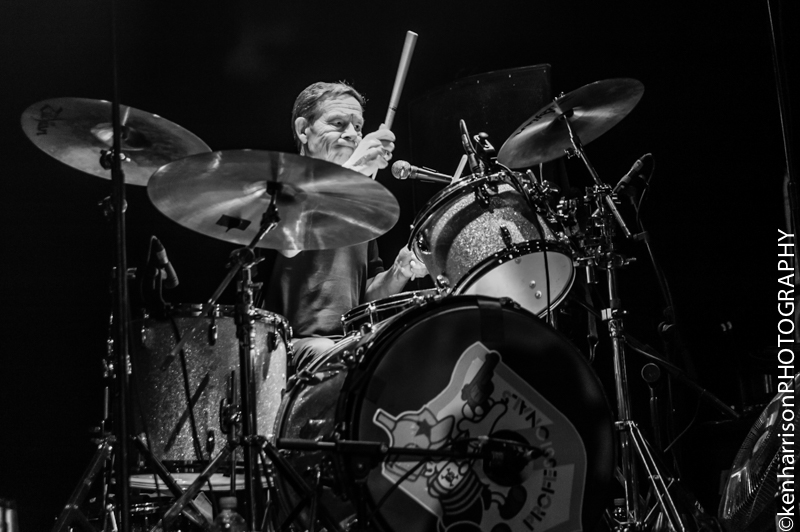 After what seems an eternity getting the stage changed over for the second half, The Rich Kids arrive on stage at around 9.45. Midge Ure on guitar and vocals, Glen Matlock on bass, Rusty Egan on drums with Spandau Ballet's Gary Kemp on guitar in place of the late Stella Nova (Steve New). Still a good old fashioned supergroup. The band kick off with "Strange One", "Hung On You" and then "Cheap Emotions" Ure's vocal range is still good, although the original Rich Kids vocals were far higher and more frenetic than I gave him credit for, he pulls it off. "Marching Men" comes next and Ure addresses the audience "How are ya doin?, glad you're smiling". and then we're into Burning Sounds" 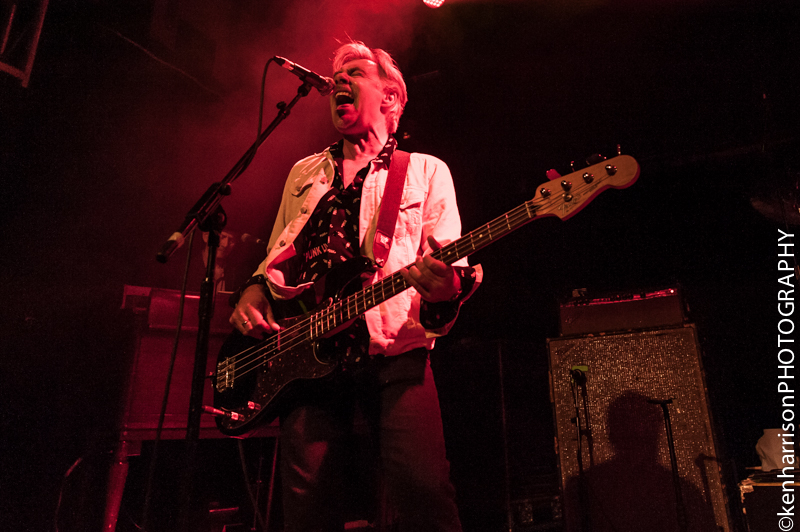 "Its been fun to learn this stuff" Ure comments (I think with his tongue planted firmly in his cheek), bearing in mind that these songs haven't seen daylight in a long time, and rarely if ever find their way into any of Ure's frequent solo performances. 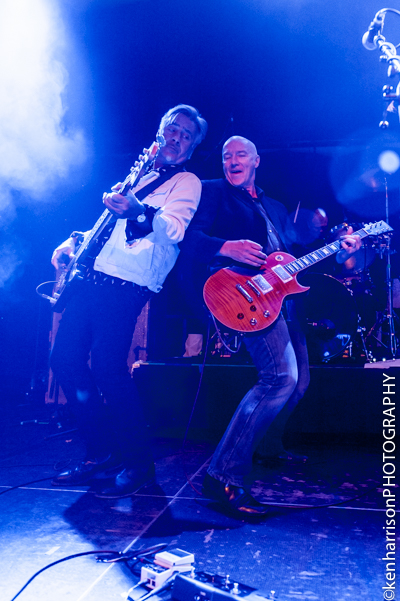 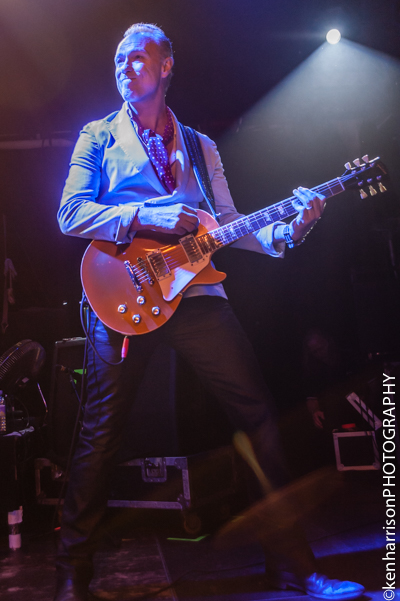 The band plays well and there's plenty of friendship here, lots of Status Quo-esque pair-ups on stage, Kemp and Ure, Ure and Matlock and they look like they're having a good time up there. Kemp at times appears to be a little cautious waiting for his cue, its not a problem, he plays well, but its less familiar to him. If The Kids' decide to do more shows, this will soon go. "Put You In The Picture" follows with Ure commenting about the part time status of the band...just like those spotted on his recent appearance with Rhod Gilbert. "Rusty's broken the kit" referring to Egan's broken drumsticks at rehearsals, hardly surprising when Egan spins the turntables rather than plays these days. 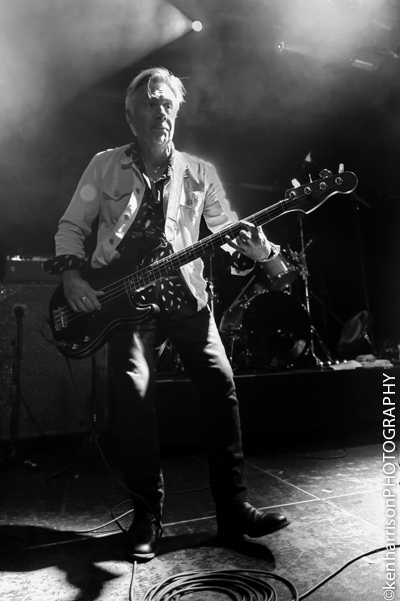 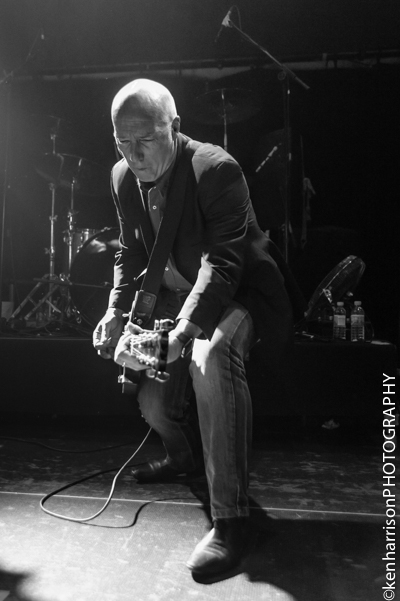 Ure announces the next song (by The Small Faces) "Here Come The Nice" as a big influence on Top Of The Pops when he was growing up. "I wanted to be him!" referring to Steve Marriott. "Empty Words" is then followed by "Only Arsenic" with Matlock dedicating it to "that prat Paul Morley". "Enjoying yourselves?" Matlock asks the audience "I am!" as they play "Bullet Proof Lover" Matlock mugging to the crowd and then leading the handicapping for the final song "Ghosts of Princes In Towers", to cheers and whistling from the audience. As the song finishes Ure quips "See you in another 38 years!" 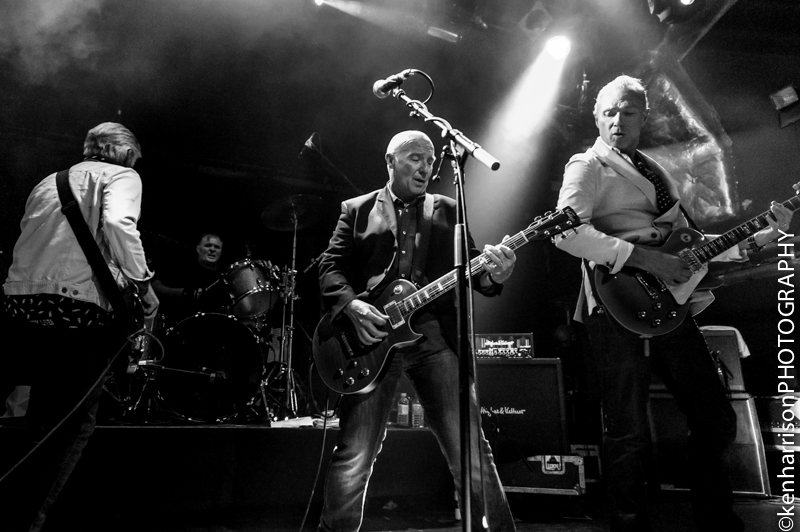 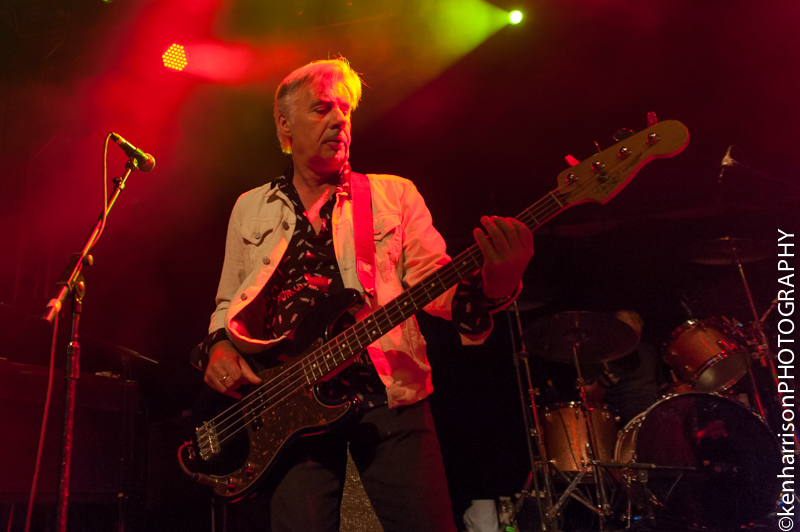 But its not quite over yet, after briefly leaving the stage, and then returning Matlock says "We've forgotten one'. Ure gives his thanks to Kemp and Kemp promptly apologies for his "Faux Pas" Ure quickly responds with "True"... (geddit?), The last song is "Rich Kids" and the band finish to me cheering and line up at the front for the obligatory curtain call.

Rich Kids played for around 50 minutes, an excellent set. I've not heard much of the Rich Kids catalogue apart from their couple of singles way back when as a pre-teen. Having enjoyed the set from Rich Kids and The Professionals tonight, I think I have some catching up to do on a couple of pieces of musical history that escaped me.