12/03/2016
The Stranglers, back for 2016 at the O2 Academy, Birmingham with Mike Peters in support
Gig review by Zyllah Moranne-Brown with photography by Ken Harrison

Well the Spring alarm clock has gone off! Woohoo! And it’s that time of year again - we set our clock 12 months ago with this date, this time of year, this venue. Mid March. And here in Brum, at the o2 Academy they be waltzing on in - the return of the Men in Black: welcome The Stranglers. 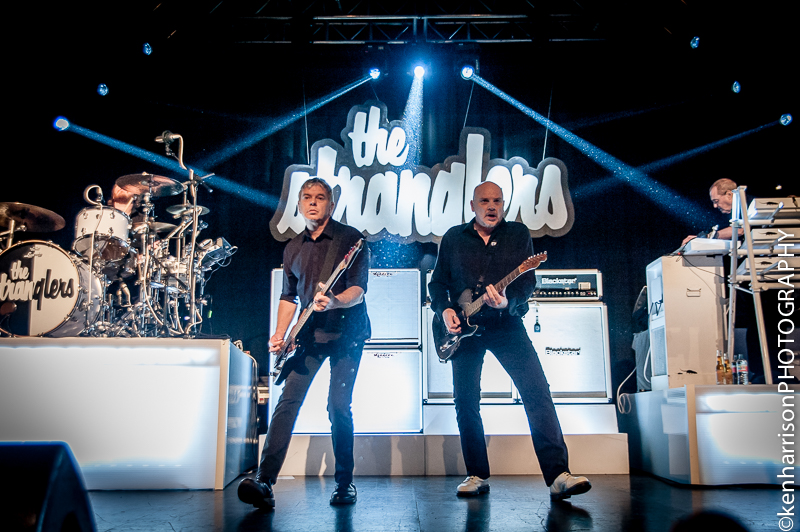 Tonight’s support comes from Mike Peters and The Alarm.  These Welsh rockers hey day was the eighties - album ‘Declaration’ their peak. By the early 90s after years of touring, it was over - but Peters' has always been a busy boy, touring, in various bands including Dead Man Walking - 'a super-group' with a long list of contributors from Captain Sensible (The Damned), Billy Duffy (The Cult) and Kirk Brandon (Spear of Destiny) to name a few.  Peters' is also the current vocalist with Big Country. 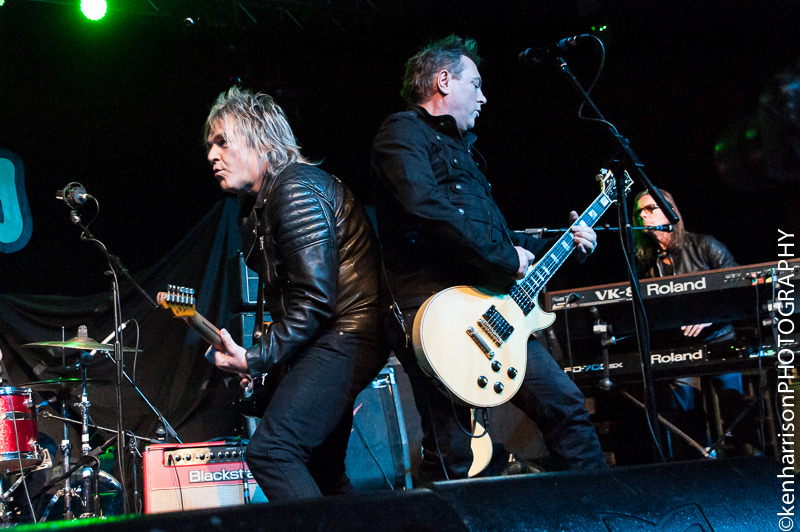 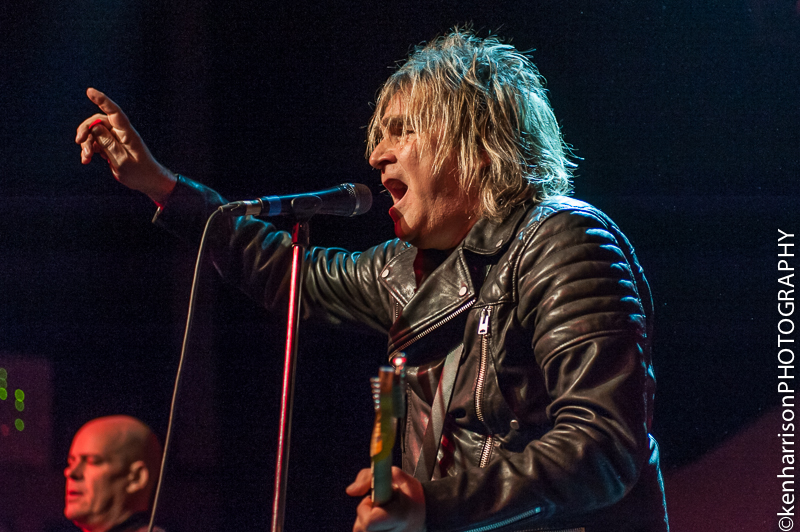 But tonight it’s back to The Alarm. 2013 saw the release of ‘Vinyl’ to accompany the film of the same name; and we get a couple of tracks from that as well hits’ ‘Sixty Eight Guns’ and ‘Spirit of 76.’ Peters'  is a cancer survivor - two bouts he’s battled so far - and on the road takes out a cancer charity. Out of 200,000 sign up’s they’ve done through the years of touring - 2,000 people have been a match to help people with blood cancer. Fair play. The Alrm give it some and go down well. Like them - they'll be back here on 15 May. 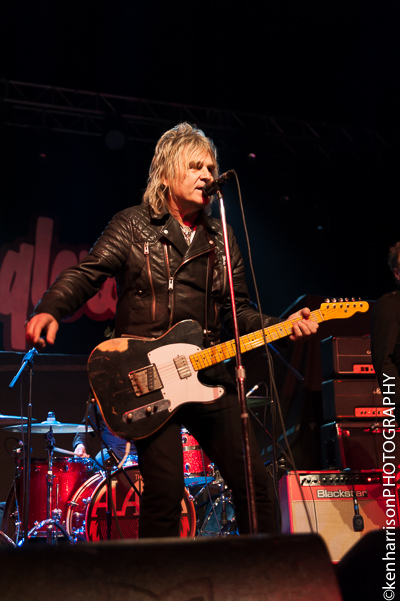 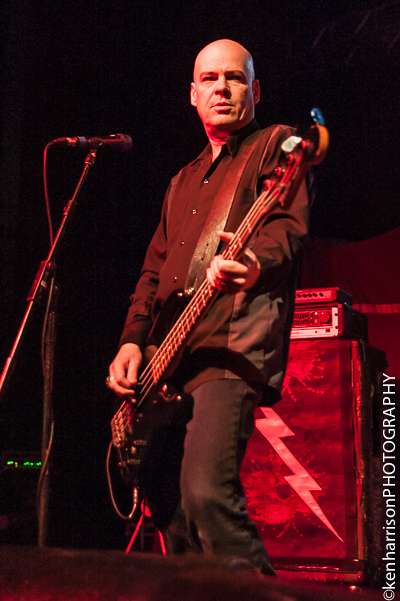 To a quick break - and look forward to tonight’s special treat from The Stranglers:  ‘Black and White.’ In it’s entirety. Recorded in ’78 - this was experimental post punk Stranglers. So bang on 9 - it’s the cheekily impish ‘Waltzinblack.’  THE intro to THE men in black; The Stranglers take to the stage. And they start off as they mean to go on with ‘Tank.’ Boom! Followed by that bass beat taking us into ‘Nice n Sleazy.’  And they pump all the tunes out from the album consequetively - totally professional. Total fun. And we punters lap it up! 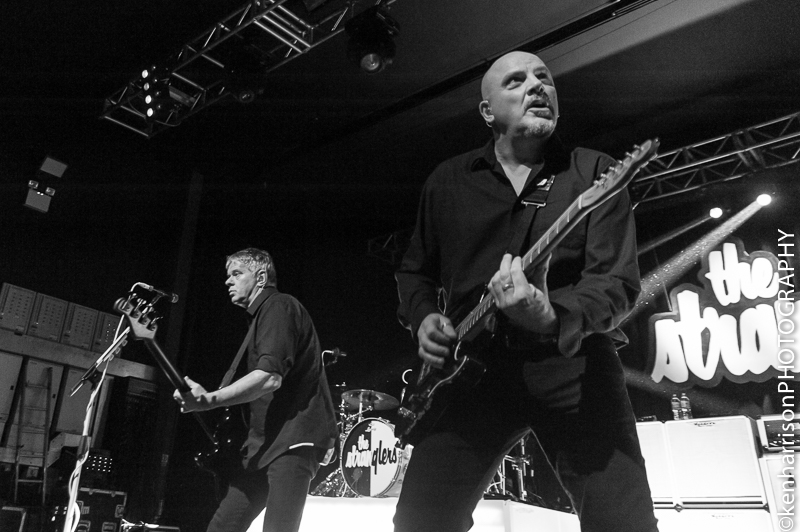 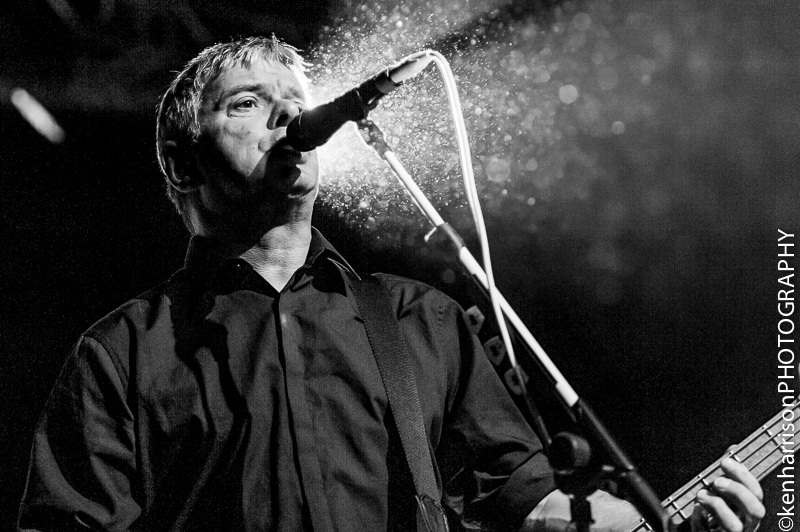 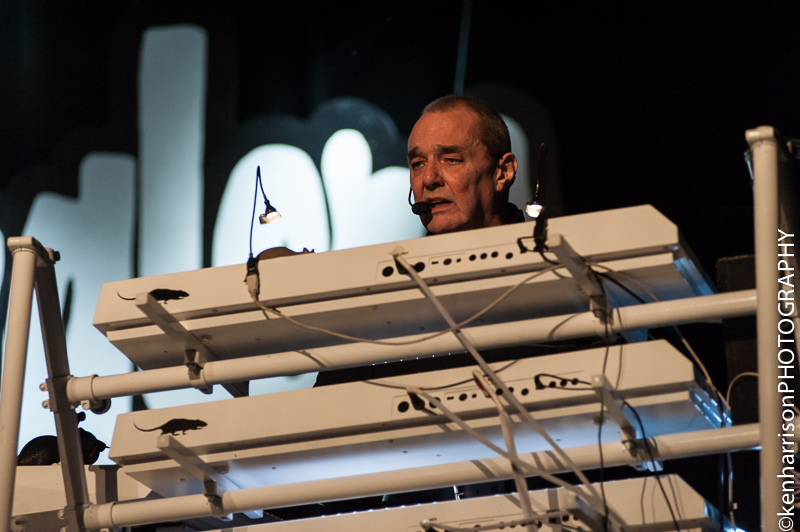 Warne is so much of part of The Stranglers now, can anyone remember a previous vocalist? Not tonight that’s for sure. 45 minutes into the gig he wishes us well - hoping we having a good evening. Of course we are, as they stomp into ‘Get A Grip (On Yourself)’ before ‘Walk On By.’ No second drum kit tonight, so sadly no appearance of the legendary Jet Black, drumming duties are courtesy of touring Brummie drummer Jim MacAulay. 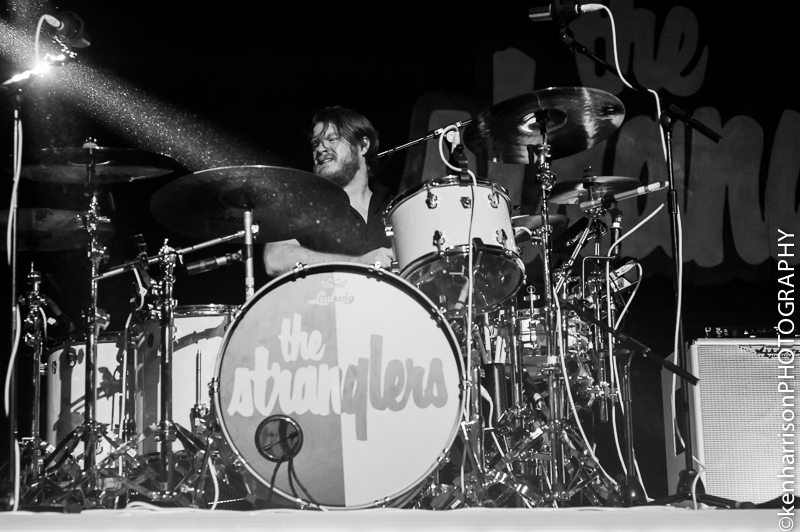 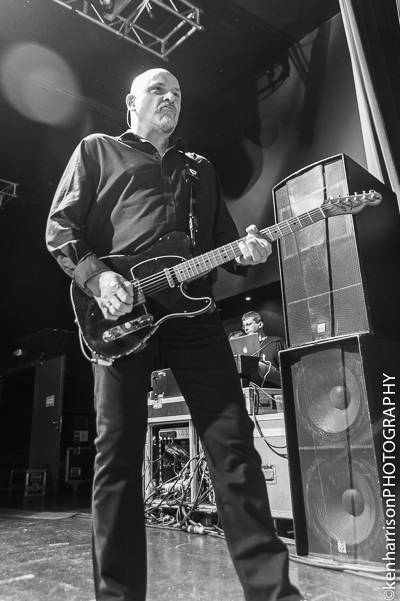 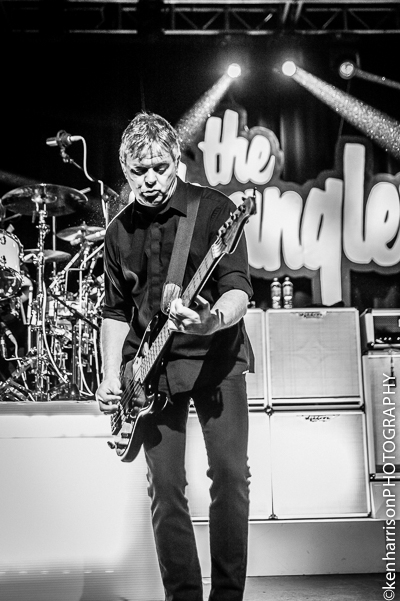 ‘Princess of the Streets’ is for Debbie. It’s her birthday. And the sun comes up. And we all beam and sing along - ‘Always the Sun.’ And then to the trio to end the main set; ‘Relentless’ - which is, and rolls and rolls; the politically incorrect ‘I Feel Like  A Wog’; and then we agree on with this on so many levels where the world is at the mo - ‘Something Better Change.’

Quick break and they're back - Burnel takes to the front of the stage. Strumming his bass - with that’ snarly bass beat - instantly recognisable ‘Peaches.’ And we sing and then it’s ‘Hanging Around…’ 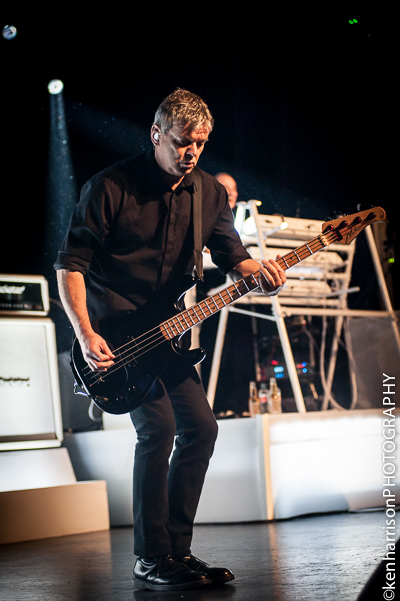 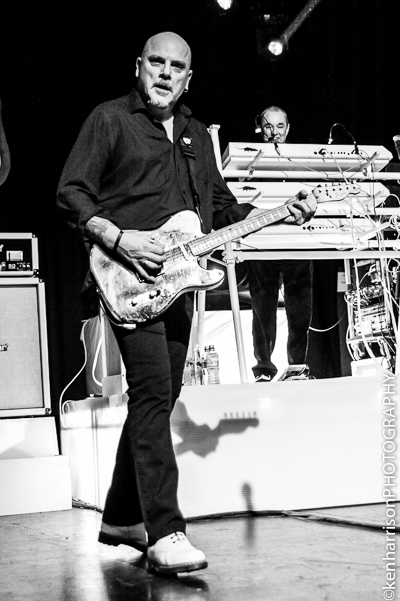 Another break. Warne tells us something unusual is gonna happen. Marie Waddinton. Baz calls her name and she acknowledges from the crowd at front of the stage. There’s a bloke on stage. Tony. Now you know what’s gonna happen. A marriage proposal. And a yes - to a huge cheer from the audience! 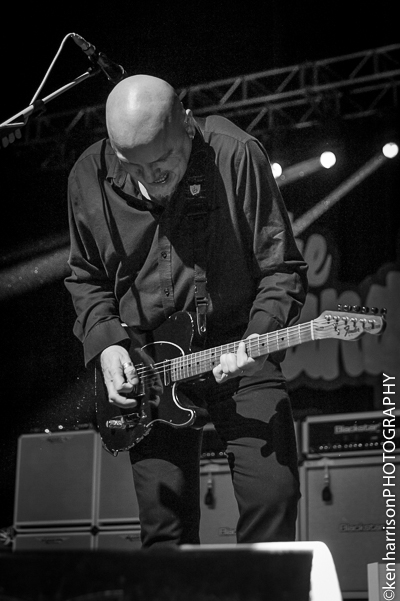 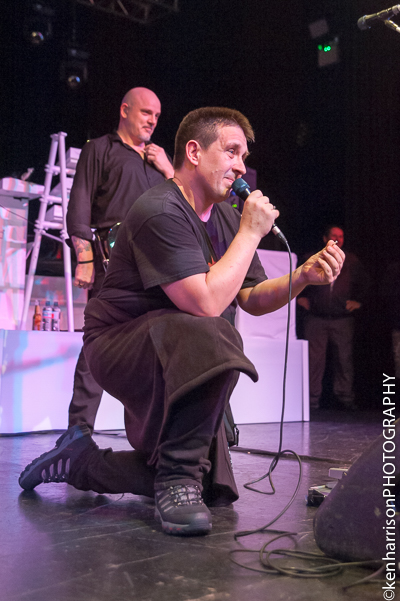 ‘Now get off the f**** stage and enjoy the rest of the night…” quips Warne, as Burnel takes to the front of the stage again – spotlight on him, and a huge grin. He’s slapping his bass. ‘Go Buddy Go’ all punk before a totally recognisable riff - ‘No More Heroes’. And the place goes mad.

The Stranglers always go down epically in Brum, it’s a sort of homecoming for them. WE are these guys still out touring? Because they. Love. It. As much as We do. They take their music seriously, they are exceptional performers, Burnel probably the best bass player you will ever see.

And like a good wine, they just get better and better with age. and every year more and more people turn up to these annual events, from little people with their parents to silver surfers - giving a whole new meaning to crowd surfing.  The Stranglers remain uncompromising, they they do it their way, and let us in on the ride. They’ll be back in 12 months. Right here. In Birmingham. Probably the same date. It’s in me diary already.  No more heroes anymore? Pah. I’ve (once again) just seen THE Men In Black!

********
Setlist:
Black and White {1978} in its entirety:
Tank
Nice ’N Sleazy
Outside Tokyo
Hey!(Rise of the Robots)
Sweden (All Quiet on the Eastern Front)
Toiler on the Sea
Curfew
Threatened
In the Shadows
Do You Wanna?
Death and Night and Blood (Yukio)
Enough Time

Encore I:
Peaches
Hanging Around

*****
The Stranglers - Black and White: in addition to the limited vinyl reissue of the album,  there is a special compilation CD release entitled ‘Black And White Live’ which features 17 tracks in total.

*****
By Your Side: backed by two times survivor of cancer Mike Peters.
By linking up with Delete Blood Cancer over 200,000 people have contributed to a test through testing at gigs - with 2,000 matches made to fight cancer.
For more information visit: www.wrthdyochr.org - or on social media @awyrlascharity
Or visit: deletebloodcancer.org.uk
Next
Previous