There's a starman waiting in the sky, he’d like to come and meet us, but he thinks he'd blow our minds…”  - an apt lyric from a lost legend. Well tonight we have the opportunity to meet a real life starman, who is here to meet us. Colonel Chris Hadfield blew our minds when he circled the earth in a tin can, just like Major Tim Peake is doing right now. He talked to us, through the power of social media - from up there. And tonight he’s right here. 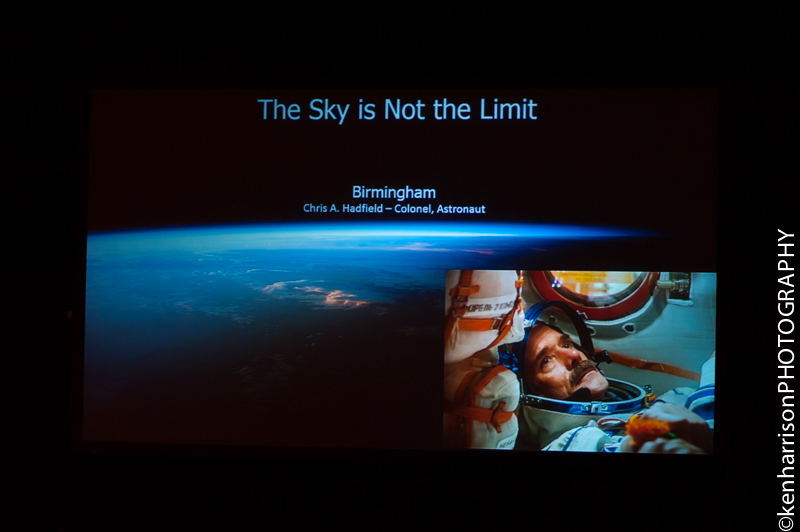 “Good morning, Earth.” This is how Hatfield greater the world everyday during his 5 months circling the earth on the International Space Station (ISS) on Twitter. It blew my mind that someone could tweet from space - relaying some of the most beautiful images of earth - but also of where we live. That picture of the West Midlands in intricate detail. Camping in August a few years ago  - we watched, in an amazing clear sky,  the Perseid Meteor Shower and saw the bright light of the ISS go overhead. Hadfield was on there - tweeting away.

A musician he posted a farewell music video - Bowie’s ‘Space Oddity’ which Bowie acknowledged as being one of the most poignant versions ever recorded and he personally made sure the rights were in place - a song he’d written BEFORE man land on the moon. Hadfield's version instantly went viral, garnering millions of views quickly. It has now been viewed over 26 million times. 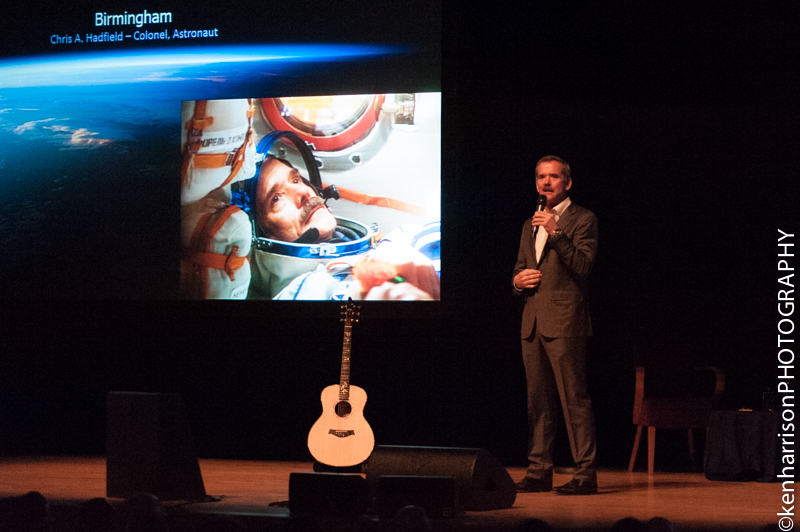 So tonight’s ‘An Evening with Colonel Chris Hadfield’ starts off with a quick video presentation. But the stats on the presentation are jaw-dropping - this man can fly over 100 different types of aircraft, and that's before his 21 years as a space explorer - 3 spaceflights (two on the Space Station and one on ISS) - with over 2,600 orbits of the earth...

And as he takes to the stage, the audience applause in wonder and awe. The sky is not the limit he tells us and is truly humbled to be here. He’s in Birmingham and has done his research - points to the engineers and inverse of the past - of Bolt and Newcome, Watte and Franklin - those engineering pioneers that made his dream possible.

He’s left earth. And come back 3 times. And as he relates the phenomenal journey from the night before to arriving in space he comments that in the Space Shuttle Atlantis he had a ONE IN THIRTY EIGHT chance of dying. That’s akin to 23 BA airplanes failing every day. He’s inspiring, enthralling, whitty, humble and truly fascinating all at the same time. As he points out - you go to space with your belly button pointing at the universe as he related the position astronauts sit in with the explanation of a chair, knowing they were sitting above the massive explosives which will propel them up there.

The presentation is full of mind-blowing stats and fascinating facts. Over a decade in developed the Space Shuttle computer system was ‘frozen’ in time in the mid 70s. The entire computer system was powered on 128k. That’s kilobytes. Not megabytes. That wouldn’t power up your average smart phone! 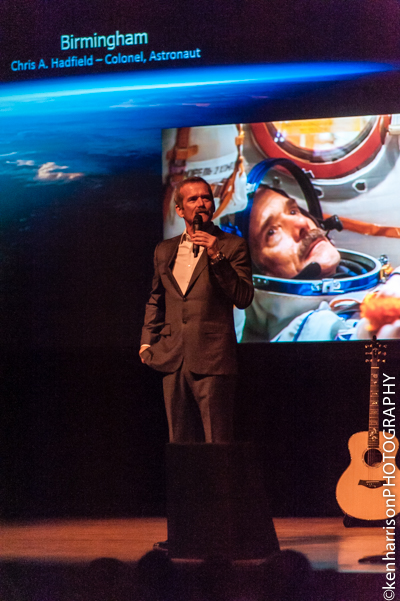 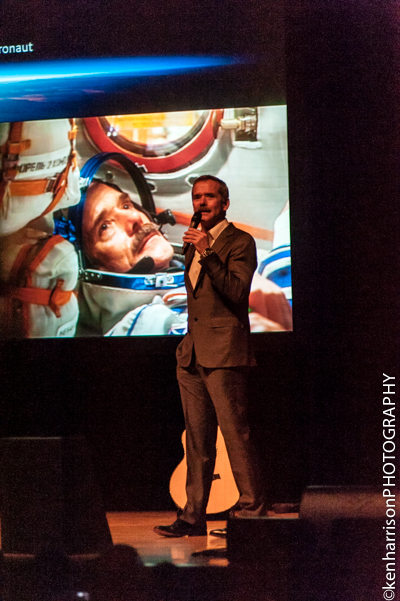 There’s a saying amongst astronauts that "there's no problems so bad you can’t make things worse." Years of training and practice allow them to make decisions to hopefully ensure that decision hopefully won’t quite literally kill them. Every decision that is made is life threatening. The launch of the Space Shuttle - the rockets eat 12 tonnes of fuel every second - the power makes your average supercar sound like a tortoise -  80 MILLION horsepower. Within 45 seconds you are through the speed of sound.

Hadfield was just a boy from Canada, He dreamed of being a spaceman when Canada had no space programme - but he dreamed and worked and had a steadfast vision. And had the opportunity after all those years of trying to circumnavigate the Earth 16 times a day, to see the sun rise every 92 minutes.  On screens are his pictures from space - of natural and man made creations on Earth. Of Climate Change in action; of the intricate details of cities. And this chap from Canada realise that looking at Jakarta - that the people became us and not them.

And indeed he’s uttered those famous words “Houston, we have a problem.” Talking to Earth from up in space is like calling up a helpdesk - they always put you on hold... 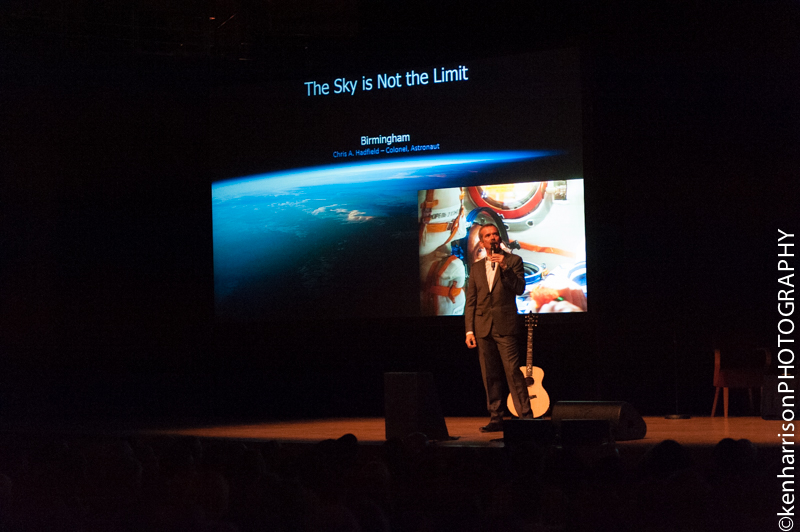 Gravity -  the ultimate oppressor. We all take it like a bunch of sheep. He’s like to make us weightless - just for 5 minutes - to float around the amazing venue that is Symphony Hall. We’d love it. Water in the space station is fun, (as long as it doesn’t get into the electric) it floats in these globules - a daily game of fascination.

And circling the world in ISS is travelling at 17,500 mph. He did a spacewalk - he was that spaceman - just like Tim Peake has just done. Facing the sun it’s a whopping 150 degrees. Meanwhile the other side is MINUS 140 degrees. You are continually bombarded by space dust and fragments all travelling at 17,500 mph - sad blasted by the Universe. But as he did his walk, he got put on hold by the Earth Helpdesk and realised he was clinging on hard by one hand to the space station. So he held by his finger tips. And then let go - travelling around the world at 17,500 mph alongside ISS, before that call came from the Helpdesk and he came ‘down to earth’ and carried on with his task.
He was there and looked down to see the Southern Lights (Aurora Australis) though his legs…..

And the journey down from ISS - far from glamorous and at times surreal as they are pulled from the capsule, sat on deckchairs in the middle of nowhere and given cups of tea.

He tells us of the future - what Branson, the bloke from Google at that other bloke from Paypal are seeking to achieve - space travel. Wireless networking around the world. And at Christmas the man from PayPal delivered (after some attempts that didn’t work - show on screen tolaughs) a space rocket that landed itself. The whole audience gasped at the footage.

His mission is now it to relate the impossible - to get young people to dream and believe in their dreams. A Q&A from the audience - does it smell in the space capsules(6 people locked in a tin can with no showers for 6 months - was remarkable less whiff than you would imagine - it’s that gravity thing again!). Do aliens exist? Do you drink in space? To which his answer was pretty much everyone is a designated driver. (The life and death risk is that critical).

And to complete the night’s proceedings the starman turns musician - guitar in hand - he gives us ‘Space Oddity’. Timely and poignant in so many ways.

Hadfield says we should be so proud of our own spaceman from Chichester, Major Tim Peake, currently floating in that tin can, high above the Earth.  And when he returns he will have the story to tell like Hadfield tonight. Hadfield is the Indiana Jones of Space, and explorer with truly intergalactic experiences. And a genuinely lovely chap and a legend in our life time. And one who’s stories should never be missed. Get the chance catch him at one of his presentations - say hallo to the spaceboy.