The 80's are here again, as if they never went away. As part of their annual national tour, and returning to Clapham Common, Lets Rock! London, arrived for this year's big retro blast to celebrate all things 80's on Saturday 15th July with a star-studded line up of some great acts from the late 1970's through to the early 90's.

Saturday is overcast and a few showers arrive during the early part of the day, but this does nothing to dampen the spirits of those here to play and enjoy the music. The crowd is bright and colourful, with many dressed up for the occasion. In amongst them are some wannabe Durannies, a Freddie Mercury looky-likey and lots of neon colours. 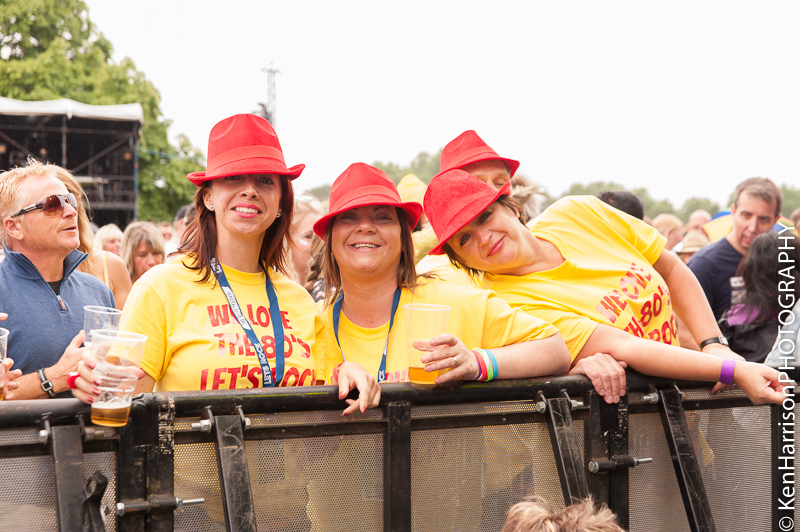 The day is hosted by DJ's Pat Sharp and Dave Benson Phillips, with Absolute 80’s Martyn Lee joining them on stage too. Sharp and Phillips make a good double act, with some witty exchanges between sets and working the crowd. The ‘Kiss Cam’ appears at one point whilst Phillips attempts to keep order. Each artist’s set is short and snappy, the frequentand slick changeovers taking only seconds after each set before the next artist arrives on stage. This is a BIG HITS kinda day, to get the crowd up and keep them there for the duration. 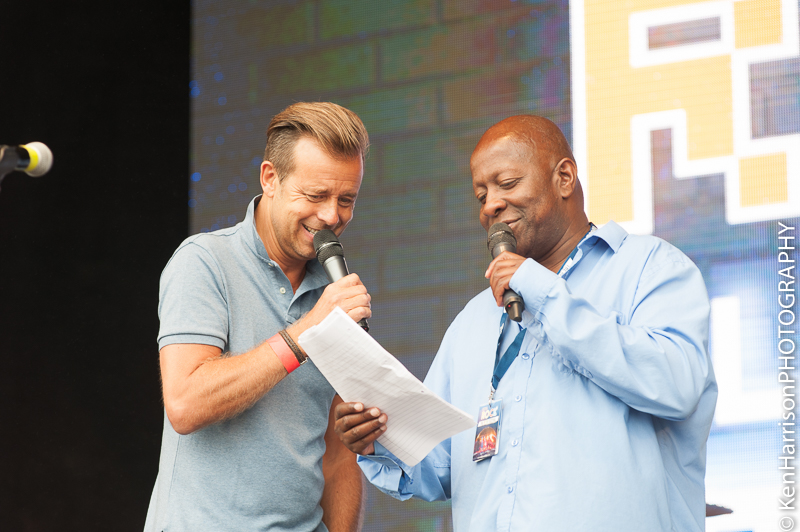 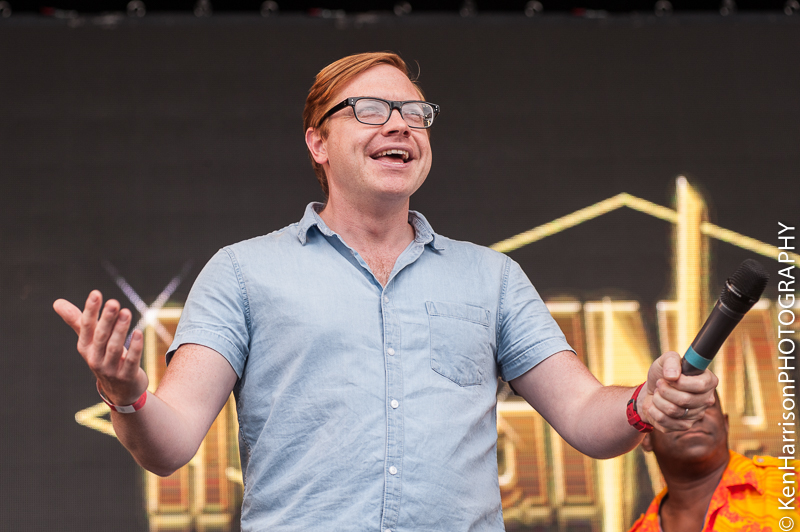 Chesney Hawkes is the opener for today, with Bryan Adams ‘Summer of 69’, his opening salvo. ‘Come Back’ and ‘I’m A Man, Not A Boy’ follow before leading the audience with plenty of ‘Yee-Ha’s” for the country music song ‘On The Road Again’ dedicated to the in-house band 'The Retrobates', who have been on the road over the last month. The Killer’s get an airing with a great rendition of “Mr Brightside’ before closing with the Nik Kershaw penned ‘One And Only’, which sees Hawkes hurl his guitar high above the stage, before deftly catching it and closing the song. 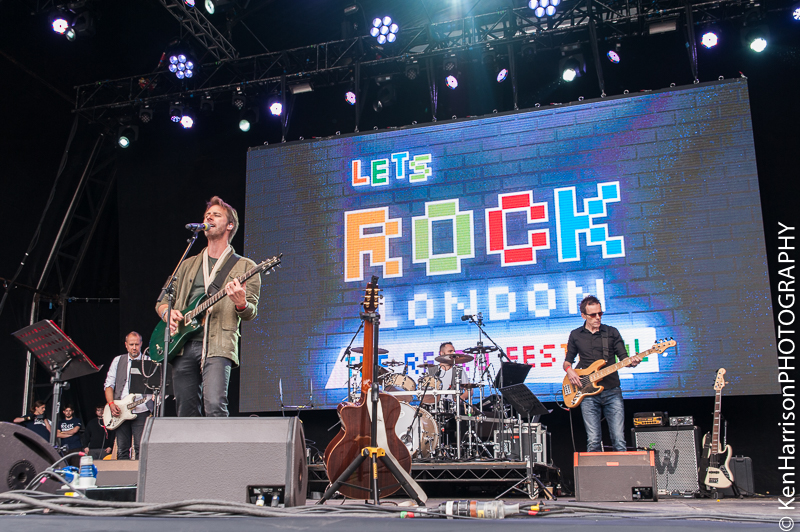 A rapid changeover and Toyah lands on stage to a burst of energy, for a bit of a ‘Girl Power’ parade of acts to see us through to the afternoon. This powerhouse is constantly on the road, performing, with 3 shows over the weekend alone. Kicking off with ‘Good Morning Universe’, Toyah covers Martha & The Muffins ‘Echo Beach’, and invites the audience to Pogo along on this ‘Rainy July day in Clapham’ with ‘Rebel Run”. Closing the short set with ‘Thunder In the Mountains’, ‘Its A Mystery’ and ‘I Wanna Be Free’ 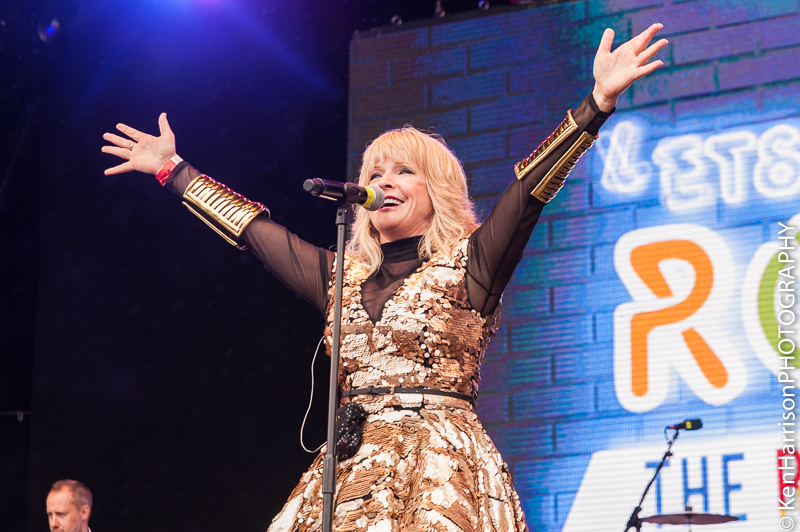 Hazel O’Connor is next with a ‘Breaking Glass’ based set starting with ‘D-Days’, then ‘Black Man’, although the set is upstaged somewhat by a pit invasion of ‘Star Wars’ Imperial Stormtroopers and assorted baddies. ‘Big Brother’ is dedicated to ‘that awful woman’ Margaret Thatcher, with ‘Will You?’ and ‘Eighth Day’ closing the set, which is for ‘Donald Trump’. Our Hazel getting a bit political. 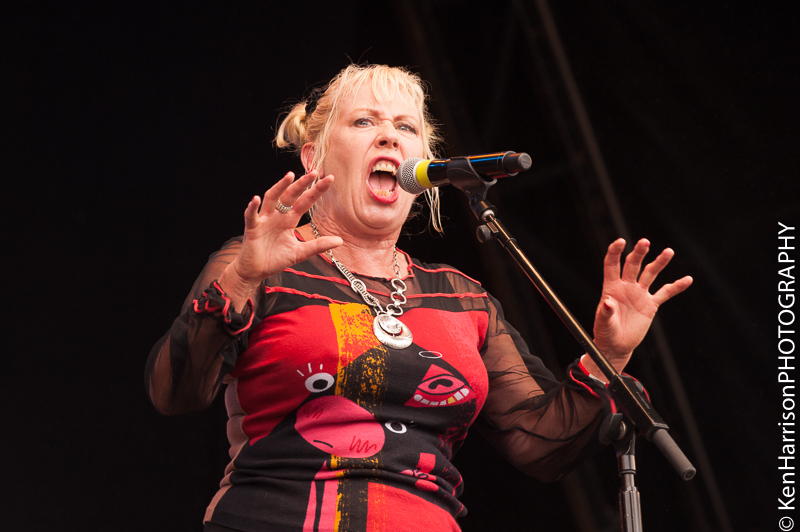 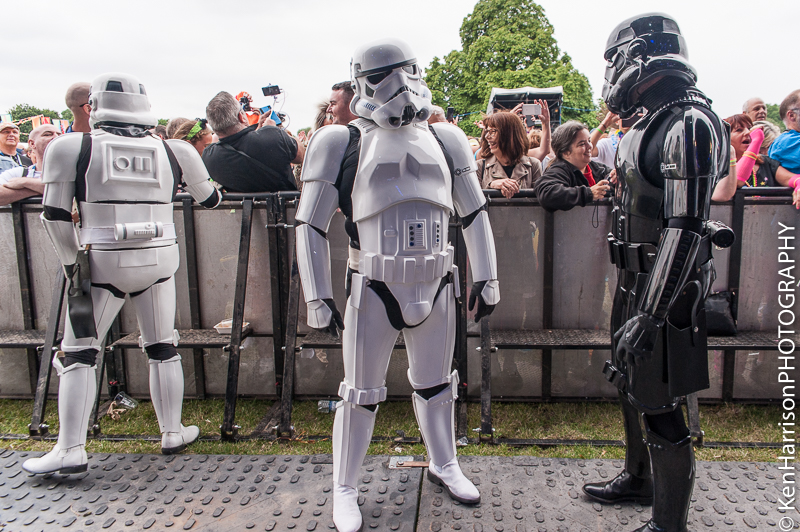 As the rain continues, Katrina arrives to bring some ‘sunshine’ with ‘Walking On Sunshine’ and a cover of The Bangles ‘Going Down To Liverpool’ 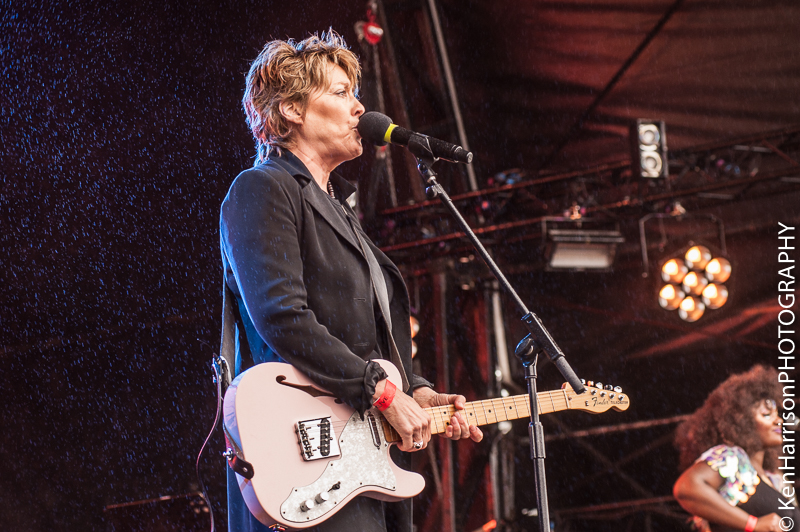 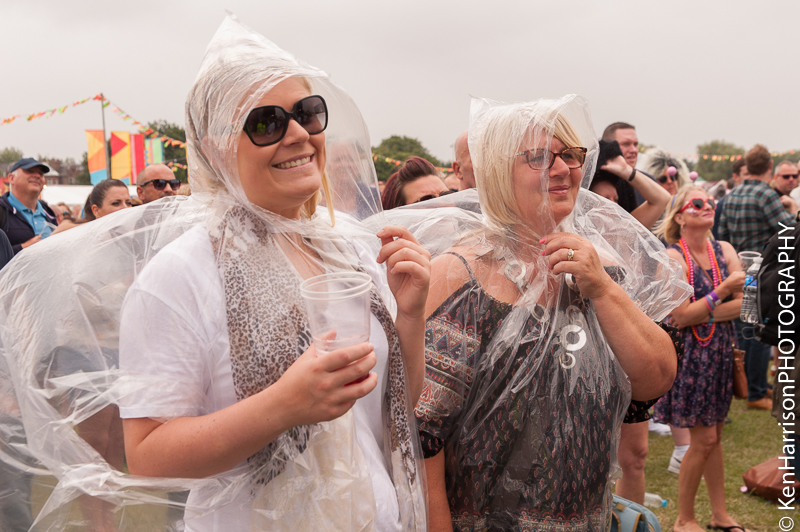 Jaki Graham is another ray of sunshine in the day, waving, blowing kisses and giving plenty of ‘Thumbs-Up’ to the audience. Opening with ‘Step Right Up’ and ‘Round and Around’, Jaki then performs the David Grant song ‘Could It Be I’m Falling In Love’, then “Set Me Free’ before finishing with a great version of Chaka Khan’s ‘Ain’t Nobody’ 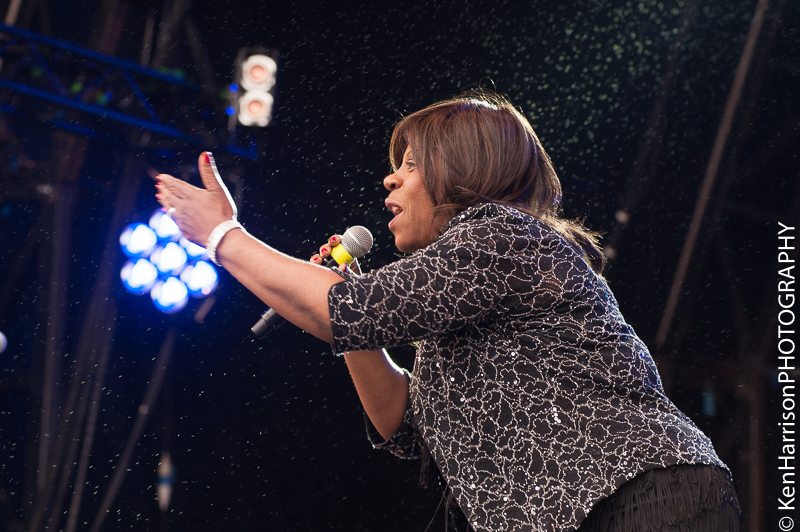 T’Pau (AKA Carol Decker) performs ‘Valentine’, ‘Secret Garden’, ‘Heart And Soul’ and closes with the classic song that made their name ‘China In Your Hand’ 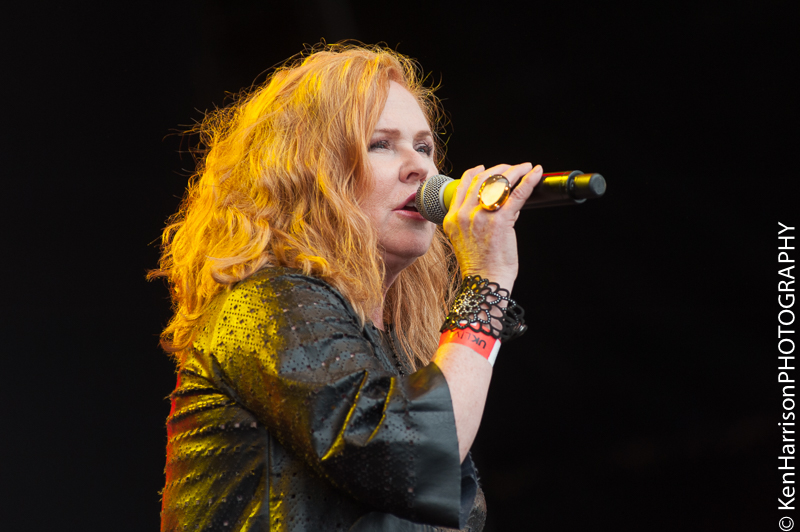 Its time to go all Latin as Matt Bianco takes the stage looking very slick for their set starting with ‘Say Yeah, Yeah, ’Half A Minute’ and finishing with ‘Don’t Blame It On that Girl’. I’d forgotten how good Matt Bianco’s songs were and oh so catchy. 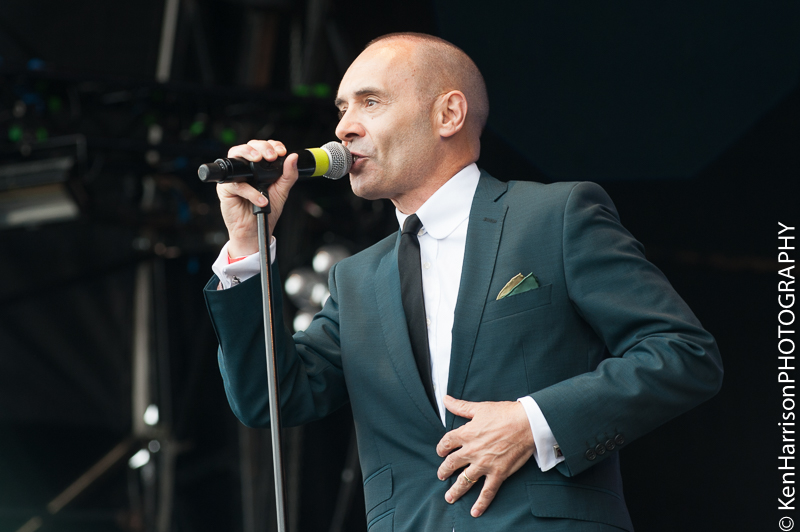 1970’s class act, Boney M arrived on stage to huge cheers, probably the largest of the day so far. Liz Mitchell is now the sole remaining original member, but the set was a great performance by the whole band. Everyone knew the songs, and everyone was singing along to ‘Sunny, Holiday’ ‘Rasputin’ ‘Brown Girl In the Ring’ and a superb ‘Rivers Of Babylon’ to finish the set. The band could have kept on going all afternoon and the audience would have lapped it up. 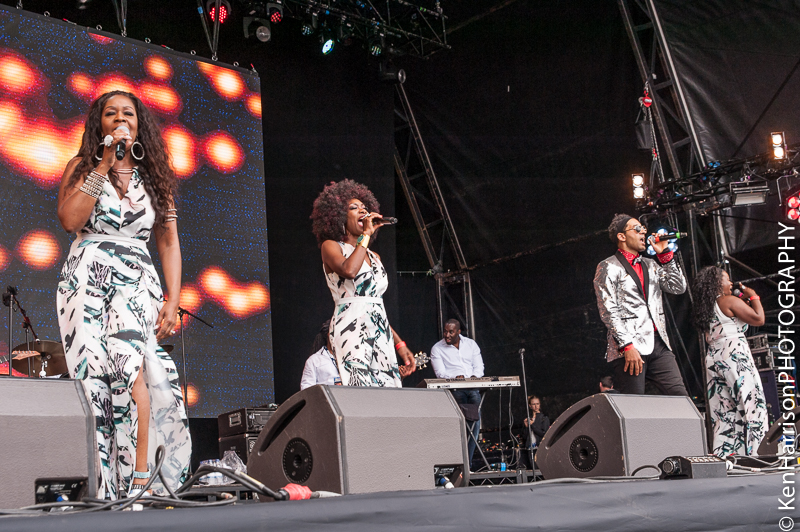 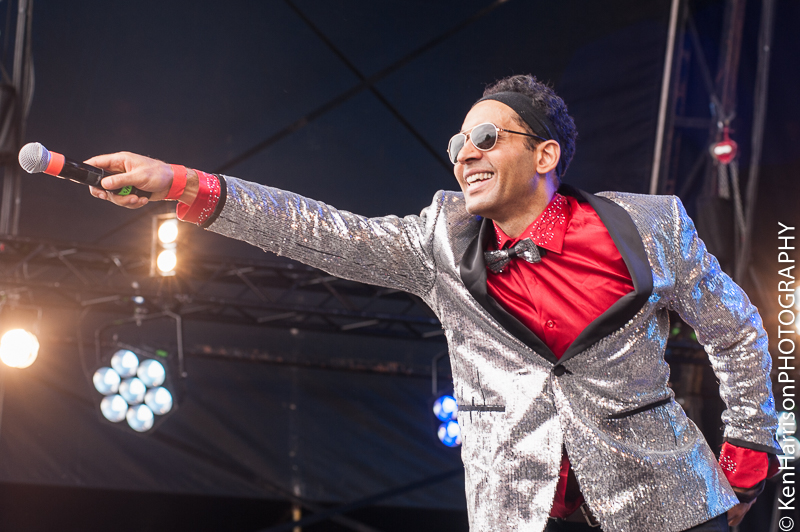 Leee John, known as the original lead singer of Imagination, now tours under the Imagination banner. Arriving on stage in his usual flamboyant way, and dressed in a white suit and hat, Lee John sounded fantastic as he treated the crowd to some classic Imagination tracks including ‘Flashback’, ‘In And Out Of Love’, ‘Body talk’ and ‘Just An Illusion’ amongst others. And he still has the moves, twirling his way across the stage, looking glam. Aided by a couple of helpers, Leee John gets down into the pit and over to the barrier where he climbs up and throws a couple of CD’s into the audience. 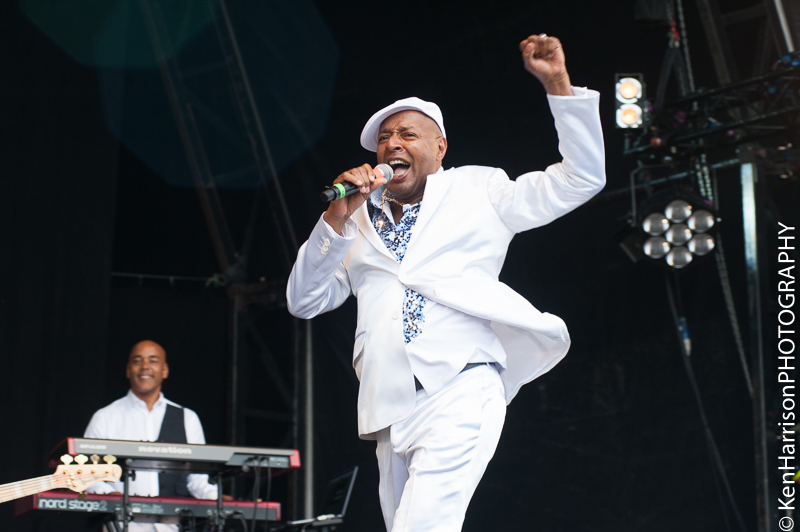 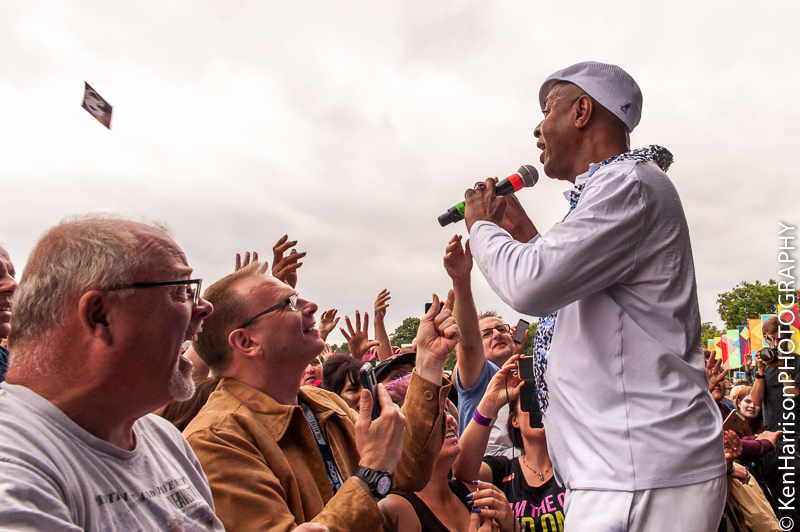 One of Sheffield’s finest bands of the 80’s, Heaven 17 are up next, with Martyn Ware and Glenn Gregory accompanied by Berenice Scott on keyboards and superb backing vocalists Billy Godfrey and Kelly Barnes. Featuring tracks from ’Penthouse and Pavement’ and The Luxury Gap’ , ‘Fascist Groove Thang’ opens the set, with ‘Come Live With Me’, Glenn Gregory’s fave Heaven 17 single ‘Let Me Go’ and closing with a soaring version of ‘Temptation’, terrific stuff. 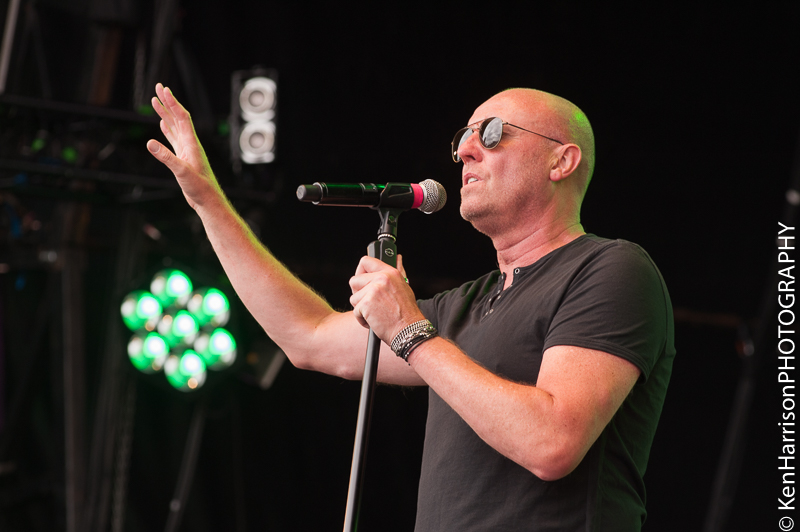 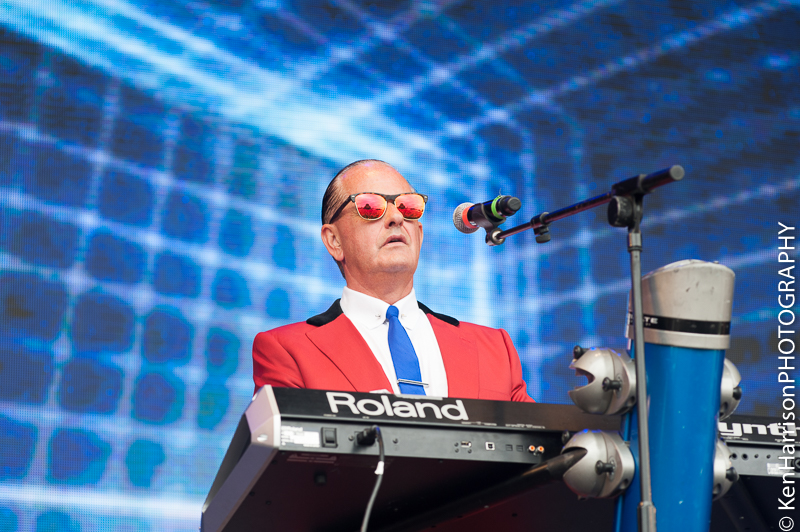 Birmingham’s own Roland Gift, formerly of Fine Young Cannibals’ arrives on stage with white robes covereed by a suit jacket, and with his backing band takes the crowd through some classic ‘Cannibals’ numbers including ‘Johnny Come Home’, Buzzcocks ‘Ever Fallen In Love’, She Drives Me Crazy’ and ending with ‘Good Thing’ Gift’s voice sounding as good as it did back in the day. 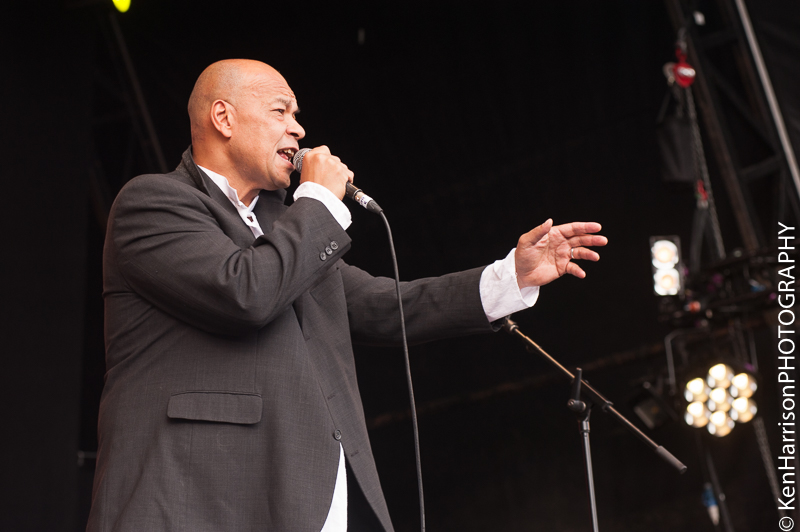 Bringing some family magic to the stage, and a few audience members too, Sister Sledge got the crowd up with ‘Frankie’, ‘Greatest Dancer’ a great cover of Chic’s ‘Good Times’, Lost In Music’ and finishing on one of the biggest highs of the day with classic Sledge track, ‘We Are Family’ 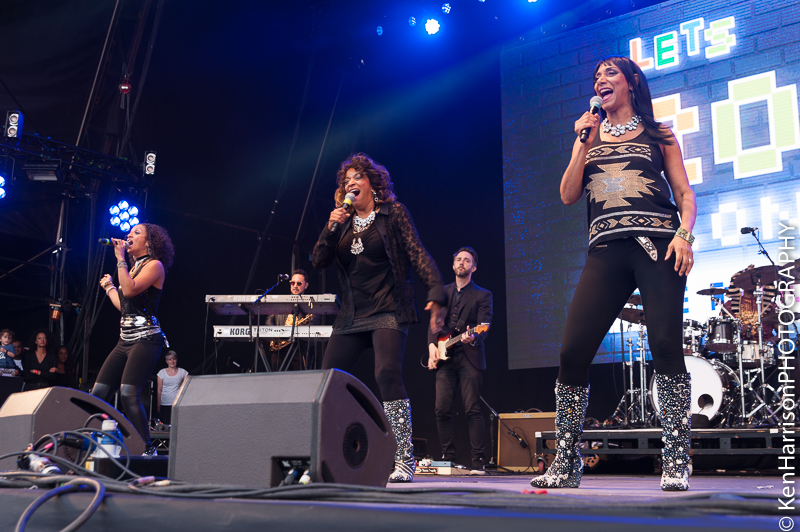 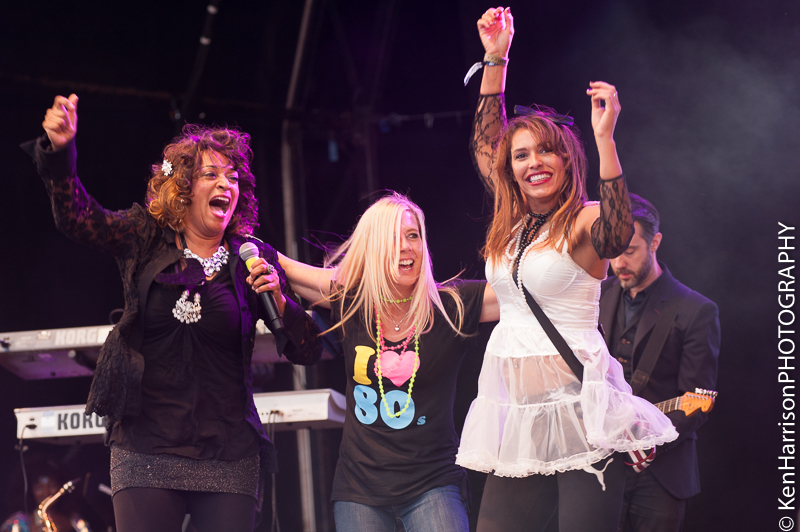 Howard Jones brought his new ‘Electronic’ band to the stage for a run through his early back catalogue of infections synth pop songs, putting a new spin on some classic Jones material. A danced up version of ‘Equality’ from ‘his debut album ‘Humans Lib’ was a great start to the set, with Jed Hoile’s graphics appearing on stage behind the band. ‘Like To get To Know You Well’ came next followed by, a very different version of ‘Hide And Seek’. Back to the dance mixes, ‘Human Touch’ bounced along, and perhaps it not one of his more popular songs, it went down well. ‘What Is Love’, ‘debut single from ’83, ‘New Song’ and closing with ‘Things Can Only get Better’ from ’85 with Jones demonstrating his wolf howl impressions and getting the audience to join in during the song. 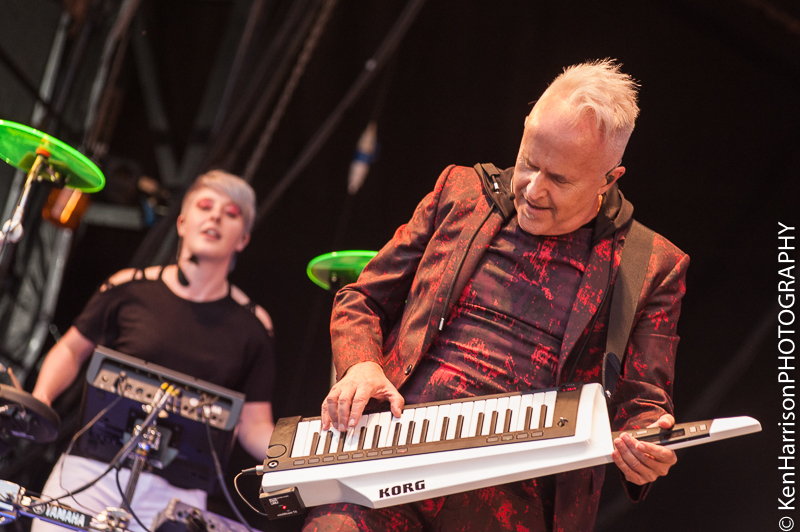 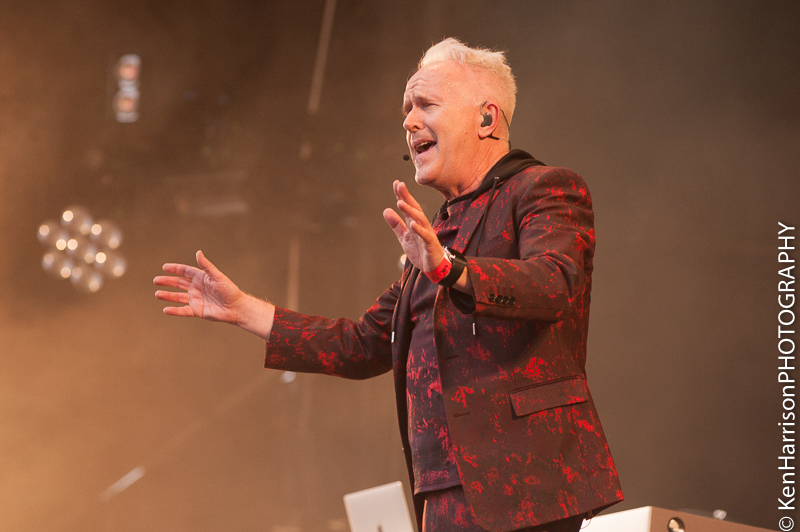 The headliner for the day was The Human League, playing a storming set of classic League songs. The stage set was stark white, with the bands keyboards at the rear of the stage, all in white too. Phil Oakey appearing in a long white plastic coat and sunglasses, looking very sci-fi, and Susan Ann Sulley and Joanne Catherall both looking gorgeous flanking Oakey at each side. Opening up with ‘Heart Like A Wheel’, Oakey ran from side to side across the stage for the first few songs with the pace of a twenty year old, stopping briefly to look out at the audience and then move on again. ‘Sound Of the Crowd’ and ‘Open Your Heart’ followed’ and a very heavy version of ‘Seconds’ sounding fantastic out in the crowd. 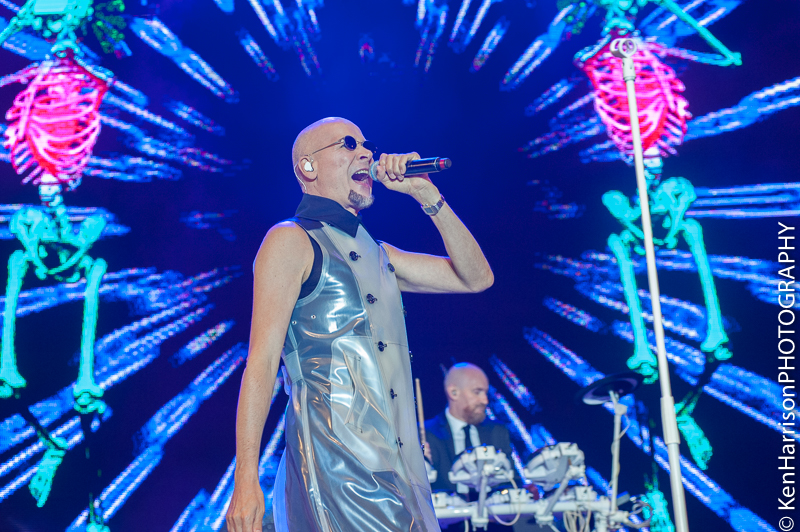 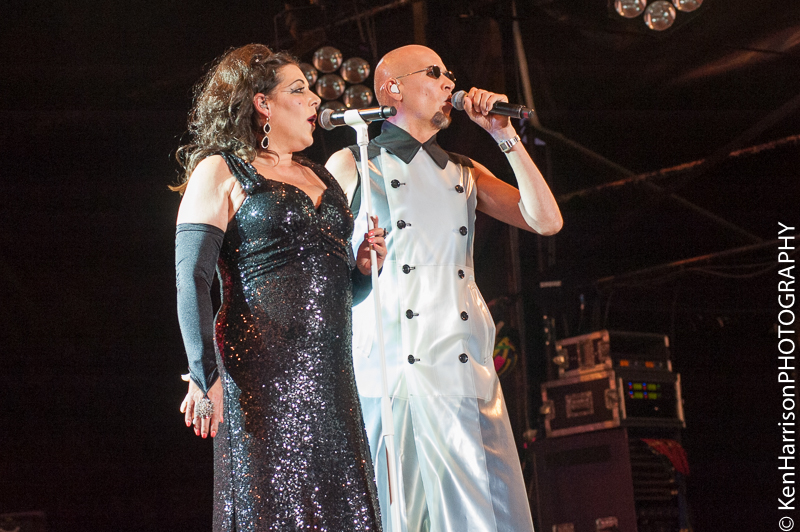 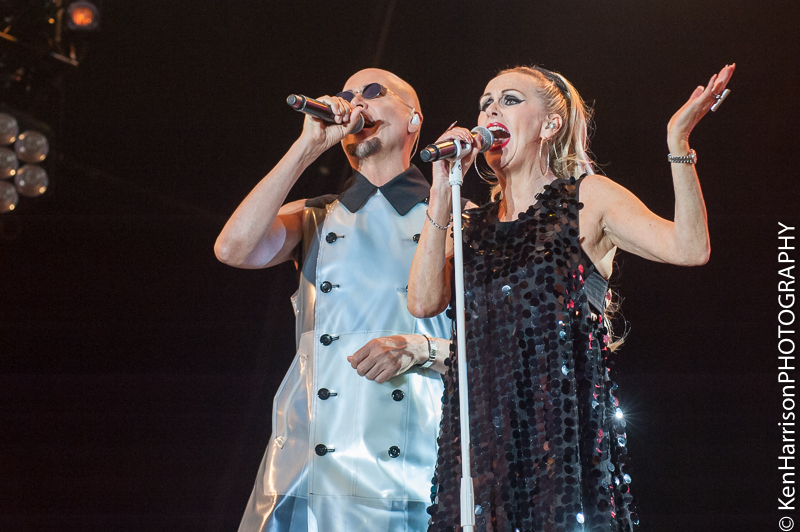 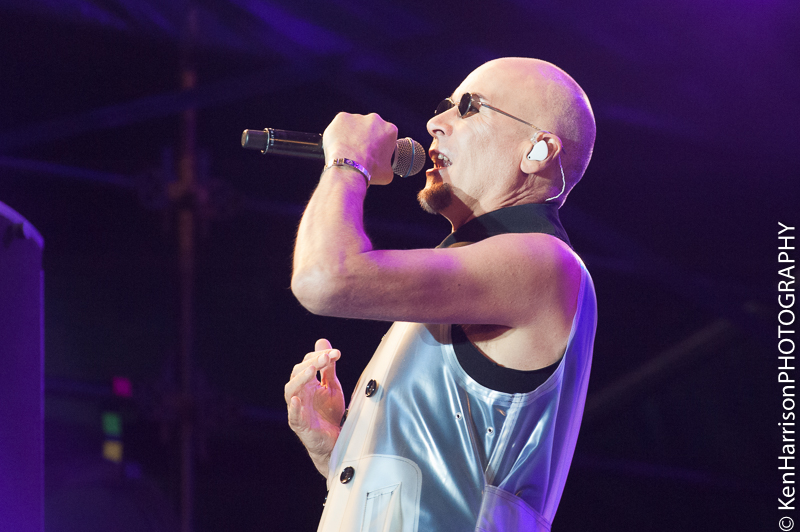 The grinding guitar intro announced the arrival of ‘Lebanon’ from ’84, followed by a much more melodic ‘Tell Me When’. The main set finished with ‘Fascination’ and an extended version of ‘Don’t You Want Me?’ We all thought that was the end, but the introductory beats to ‘Being Boiled’ came in with the rear stage screen a glowing red and we knew we were going to get more. ‘Boiled’ is a fantastic track from the earliest incarnation of The Human League, and although Oakey told fans not to buy it in ’82, its still gets a regular play as one of their staple songs. The set finished for real this time with Georgia Moroder song ‘Together In Electric Dreams’ to rapturous applause. 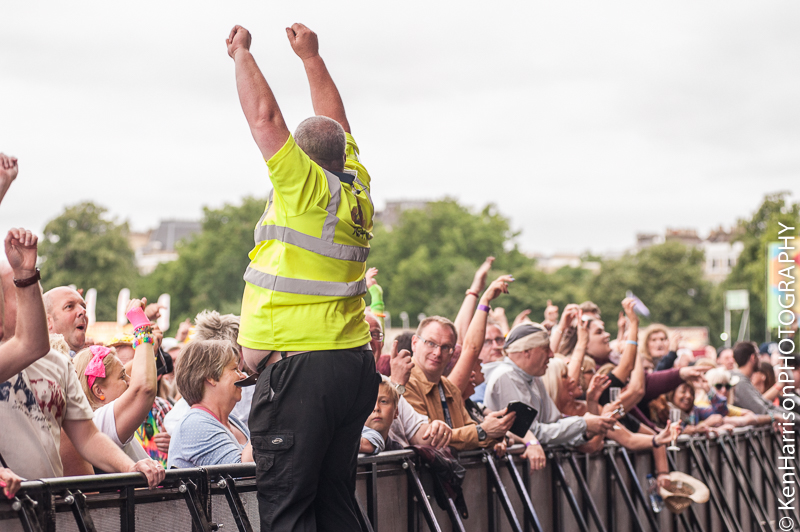 What a fantastic time. With music Non-Stop all day, and with some of the best artists from the last 40 years peforming on stage, this show has been an Absolute 80’s blast, with entertainment for everyone, including the security guys getting in on the act too. Look out for Let’s Rock! Christmas and with next years dates already announced for Cookham, Shrewsbury and dates for Exeter, Bristol, London and others due to be announced soon, there’s sure to be a venue near you to go and get your 80’s on for a great day out.
Next
Previous