13/02/2018
Line-up announcement for the seventh Festival No.6 at Portmeirion, North Wales
2018 LINE-UP ANNOUNCED

We're delighted to reveal the Festival No.6 2018 line-up of music, arts, culture, comedy, theatre, spoken word, workshops, one-offs and so much more.

Joining us for our seventh edition and topping the bill alongside the already announced, The The, are indie-pop legends Franz Ferdinand and Friendly Fires, back with new material after a hiatus. Also joining is singer-songwriter Jessie Ware, legendary band The Charlatans, art-rockers Everything Everything, Django Django, Ride, Anna Calvi, The Horrors, Gaz Coombes, a special performance from Manchester Camerata Orchestra performing Motown and Northern Soul hits and much more.

Headlining the arts and cultures bill is legendary lead singer of Madness, Suggs, performing his new one man show 'What a King Cnut' - A Life In The Realm of Madness, the brilliant Will Self, acclaimed author of Umbrella and shortlisted for the Booker Prize. Also appearing is Turner Prize-winning artists Jeremy Deller, the mighty Andrew Weatherall curating his own Psychedelic Faber Social, Edith Bowman music and films with Irvine Welsh and much more.

We will be announcing more arts, culture, comedy, food and our Wellbeing programme in the coming weeks.

Tickets will go on sale tomorrow (Wednesday 14th February) at 10am, available from the website.

For those wanting to book Portmeirion Village accommodation, this will also be available from 10am tomorrow and can be purchased directly from Portmeirion on 01766 770000.

Be seeing you in September... 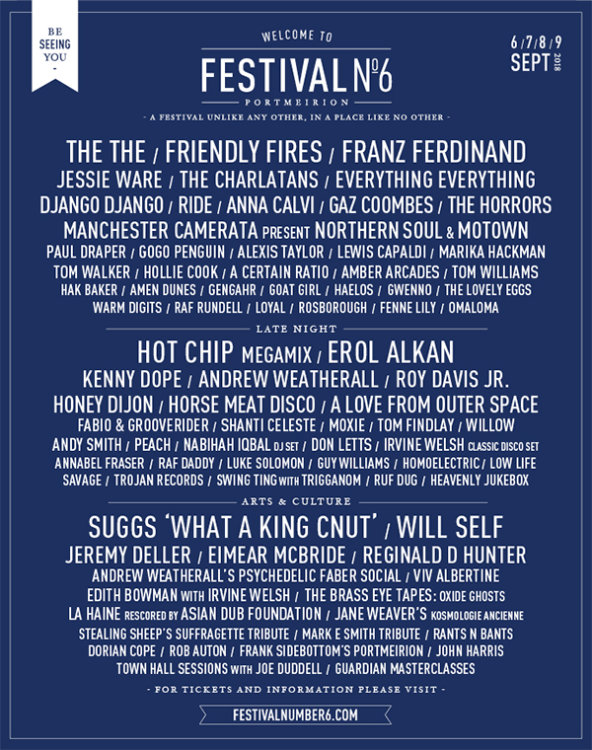